The most interesting thing about the new Statistics Canada numbers detailing an increase in the number of farms in Grey County is not so much that it flies in the face of the continuing trend in Ontario and the rest of Canada; it’s that the growth in the number of small-farm operations in that part of our local, Grey-Bruce area is clearly linked to the presence of a diverse, natural environment, or “natural forage,” as a Grey County official called it.

I call it meadows full of wild flowers and critters, a spring-marsh chorus of singing frogs, lots of songbirds, especially robins and red-wing blackbirds. I call it an abundance of various insect pollinators that will soon be buzzing around, doing their vital work of keeping the natural world, and my vegetable garden, growing and healthy.

And I especially call it trees, lots of trees, windrow-like along the rural roads and in the Hope Bay Forest and Nature Reserve on all sides of me here in Hope Ness, on the Bruce (formerly, Saugeen) Peninsula here in northern Bruce County. 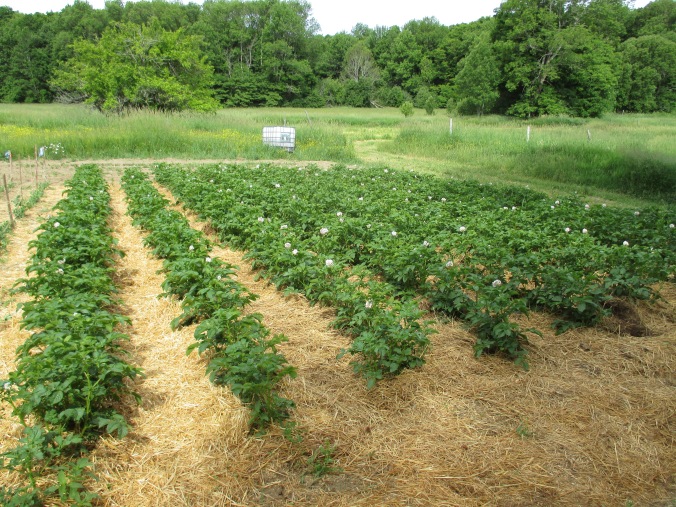 A view of my “new garden” last year, with the beginnings of the old Hay field in the background, and the forest on either side. That was a good crop of potatoes, by the way.

Hundreds of hectares of publicly-owned land in Hope Ness is being allowed return to nature after 100 years of private, homestead-farming that mostly ended several decades ago. Otherwise, this would be just the sort of land and diverse natural environment now being taken up by a new generation of young farmers in parts of Grey County. A good number of them are beekeepers, a noteworthy thing indeed, at a time when honey bees are threatened in many parts of the world by large-scale, single-crop agriculture and the extensive use of pesticides.

There’s a long, beautiful, former hayfield beyon my property-line here at Cathedral Drive Farm. It follows the curves of the forests that cover the rocky ridges on both sides for at least a kilometre. (A long story, how it’s not part of this farm any more and what happened to most of the farms, homes and barns, and the people who used to live in the rural community of Hope Ness.)

For the time being that field resembles a meadow more than anything. It’s also, I have good reason to believe, a wildlife corridor and habitat. Let’s just say my good, canine friend Buddy and I can hear the coyotes howling at night. And last summer wild things ate my young pea plants in the “new” garden near that field.

I know from local, oral history I’ve heard over the years that some of the pioneers literally broke their backs to clear fields like that here in Hope Ness.

In time nature will take back what is hers: a new, hardwood forest will spend it’s time in dominance. Then maybe hundreds or thousands of years from now a forest of tall pines like those that used to rule over most of this peninsula will be back in all their glory.

The world turns after all, and with it the seasons. That much is still the truth, even in this “post-truth” age. For the time being we seem to be adrift on an ocean of lies. But that will pass, and hopefully so will the foolishness of humankind as we learn finally how to take better care of our home, this little, blue-green jewel of a planet.

I drove through Grey County on the way south to Toronto, and later Guelph, one morning early last week, and then back up that evening.

The sun was setting – and a beautiful sunset it was – as I drove north along Highway 6 through Grey again with renewed appreciation. It was virtually another world compared with the urban sprawl and vast, treeless landscape near Toronto’s Pearson International Airport. I took more notice this time of the rolling, well-treed, familiar landscape of the Saugeen Highlands. And I thought, “this is more like how people should live,” in the midst of nature.

I confess, I also thought how well, after all, Grey County apparently survived an era of unwise, “rural estate” planning in the late 1980s and early 1990s without too much damage being done.

As always, it felt good to get close to home, to get off the highway just north of Wiarton and follow Bruce County Road 9 past Colpoys Bay with that wonderful view, and still enough light at dusk to appreciate it.

I slowed down on the way north; you never know when a deer or another critter might jump out and “high-tail it” across.

This week has been more like spring should be, sunny and warming up. Though I live in Bruce County, not Grey, my modest, two-acre (.8 hectare) vegetable garden has likely been counted among the small-scale new farms that have come to an area like this, similar to what one would find in parts of north-east Grey.

“We gained 56 farms between 2011 and 2016, which is definitely the opposite of the national trend,” Grey County economic development officer Philly Markowitz, told The Sun Times earlier this week.

“We did see consolidation, which means our mid-sized farms are being bought up, but we did see an increase in the really small farms as well.”

In Bruce County, the statistics were more in line with provincial and national trends with the total number of farms at 1,928, down from 2,011 in 2011, a 4.1 per cent decrease.

“We see the consolidation in the south, but we see more young, new and small farms coming up in the northeast,” said Markowitz. “All of that is what we could have expected.”

Markowitz said Grey County had a significant increase in its number of new, young farmers between 2011 and 2016. “We added 20 per cent to our demographic of 35 and younger. The national average was nine per cent, so that is a big trend.”

That’s good news for Grey. Bruce County officials, especially those involved in planning, will certainly take notice. My own sense is what’s happening in Grey is probably also happening in some parts of Bruce, where the natural environment reflects the same sort of diversity.

I can’t lay claim to being part of the trend toward more young farmers. I’m way past that threshold. 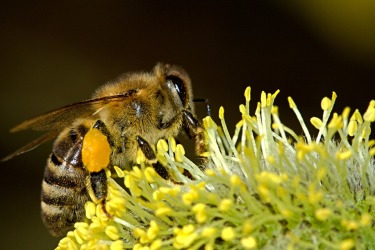 A bee doing what it does for the sake of life

But if I had it to do all over again, I’d go into farming, I’d chose a piece of land just like I have here in Hope Ness. And I would definitely get into beekeeping.

The globally-endangered pollinators are literally our best friends. Much of the world’s food supply is dependent on them. Besides, they have their own natural value, just because.

A version of this was originally published in The Sun Times in May, 2017

7 thoughts on “In praise of living naturally”