First, allow me to take a few moments to look on the bright, hopeful side.

This row of squash got through an unusually cool, wet summer in southern Ontario, Canada to produce an abundant crop. Nature found a way.

It is now officially fall in the Northern Hemisphere. That makes sense, after all, we’ve just had a long stretch of mostly sunny, warm, summer weather. Things in nature, and in human life hopefully, do have a way of balancing out. At least that’s what I told myself and certain of my garden plants throughout this now-recent, unusually-cool, wet summer.

Hang in there, be patient, I told my corn, squash, and beans especially in so many words: the sun also rises, and will soon shine for more than a day or two in warm succession.

I may even have told them not to worry about the discouraging, dangerous, political turmoil across the waters (for Michigan, U.S.A., after all. is on the other side of Lake Huron). “This too shall pass,” I told the assembled young plants, recently and oh-so hopefully emerged. “My children” I said, rising to the occasion as if to address a multitude that needed cheering up on a cool, grey day with rain threatening, yet again.

“And all shall we well,” I called to them. Then, turning to the trees and my wondering dog, Buddy, I sang it out again, with a voice thunderous in the quiet morning, my best baritone, with what I hoped was powerful authority to calm the Cosmos and influence the shape of things to come: “All shall be well!”

Buddy came over, his tail wagging, looked up into my eyes, and licked my hand, as if to offer comfort and consolation to my apparent disquiet. 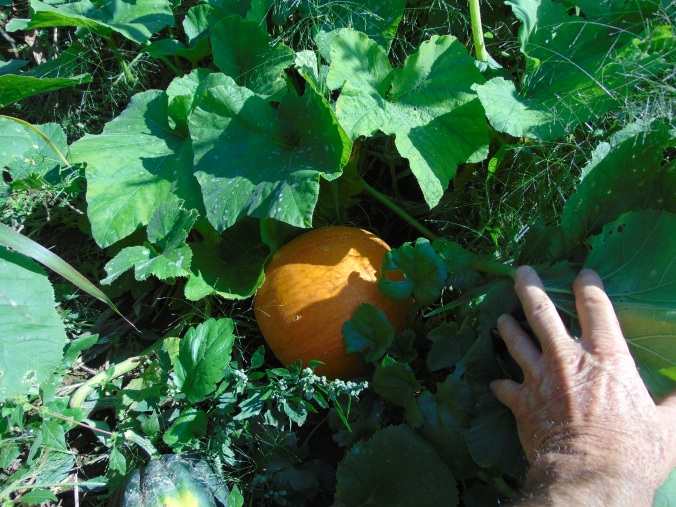 That was in what I ruefully called the “hot garden” out back where the ground gets full sun from the west across my part of an old hay field that winds through the hardwood forests on the rocky ridges on either side. It’s an impressive landscape, as far as the eye can see before it winds out of sight. Like the rest of the Hope Bay Nature Reserve which surrounds my property it is being allowed to return to the wild. I won’t live to see that, but I confess I do hope it will be much like it is now: a low-lying largely open meadow full of wildflowers, and no doubt teeming with wildlife, big and small.

Yes, I talk to my plants. To what extent that helped, I wouldn’t dare suggest, but for some reason my green, yellow and purple beans thrived despite the lack of heat and sun. And the various kinds of squash and pumpkins I planted around the perimeter of the sweet corn also did surprisingly well. I will have plenty to give to family, friends, and the occasional visitor in celebration of Thanksgiving coming up soon. For a few nights a while back the temperature dipped down close to frost, but thankfully, for the squash, not quite far enough. And this past week they’ve been thriving anew in the sun and warmth. Best of all, there’s no sign of powdery mildew. I attribute that to companion and rotational planting.

All that is good news. But it was not a good season for sweet corn, especially if you plant seed untreated with fungicide, which I do.

Meanwhile, in the “cool garden” near the house, I had the best potato crop in my 20 years or so of vegetable gardening: a proverbial “bumper crop” of Yukon Gold and Russian Blue. Yes, blue, all the way through.

I planted Kale for the first time, with wonderful results, if I do say so myself. I’m still picking Kale, and expect to continue doing so into November.

So, up here in Hope Ness in the midst of the Hope Bay Nature Reserve, on the beautiful Bruce/Saugeen Peninsula, there’s plenty of reason to feel good and hopeful about the current state of natural affairs. And I say to myself there’s absolutely nothing wrong with spending as many moments as possible focusing on that while counting my blessings.

I confess, it has taken me longer than it should have to get to that point of wisdom, and to pass it on to my children, grandchildren and great grandchildren. It is, after all, the best gift of love I can give them, and you too, whoever and wherever you are in the Global Village.

Which brings me to this other side of affairs, the side that calls out for all of us to be connected to the wider world in a spirit of empathy, understanding, hope, and above all, love.

The great English, metaphysical poet, John Donne, wrote these words almost 400 years ago. They express a great truth, as true and relevant today as they ever were, perhaps even moreso:

“No man is an island entire of itself; every man

because I am involved in mankind.

And therefore never send to know for whom

the bell tolls; it tolls for thee.”

“The United States has great strength and patience, but if it is forced to defend itself or its allies, we will have no choice but to totally destroy North Korea.”

There was a collective gasp among the global ambassadors to an organization dedicated to the peaceful resolution of international disputes.

North Korea is a country of 25 million people held in miserable captivity by a ruthless, murderous dictator who remains in power and thrives on the trumped-up idea that his country is under constant threat by a powerful enemy, namely the United States. Now, apparently, that threat is imminent.

The situation just got a lot worse, not better. Why that happened is something everybody in the world needs to think about and Americans especially ask this question: Whose interests would be served by starting a war, sooner than later? 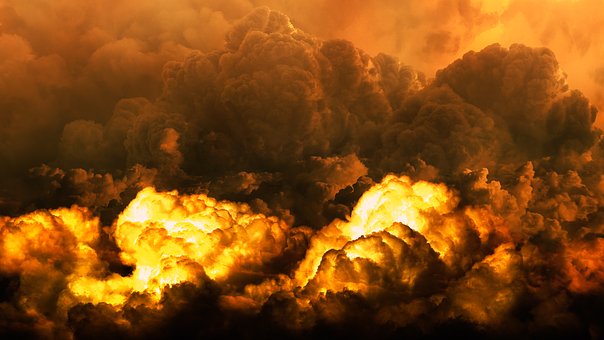 The shape of things to come? Surely not; surely we are smarter than that.

This post was partly inspired by today’s daily prompt, irrelevant. I hope this was not.

A version was originally published in The Sun Times September, 2017.

5 thoughts on “Nature will find a way. Will we?”