(Author’s note: Among the several province’s in Canada that own and operate nuclear-powered, electricity-generating stations, Ontario has by far the most reactors. They are located on the shores of two of the Great Lakes, on Lake Ontario, east of Toronto, and Lake Huron, near the town of Kincardine. Ontario Power Generation (OPG) is the publicly-owned, provincial Crown Corporation proprietor of Ontario’s nuclear plants. They include the Bruce Nuclear plant near Kincardine, which is operated under a long-term agreement, by a private company, Bruce Power. Highly radioactive nuclear waste, including a growing stockpile of used fuel, is stored on-site at Ontario nuclear plants, as it is elsewhere in Canada. But that is not considered a long-term solution. Canada’s federally-appointed Nuclear Waste Management Organization several years ago proposed an Adaptive Phased Management approach to that issue, including development of a Deep Geological Repository. The NWMO is currently conducting a lengthy site-selection process to find a suitable site. Meanwhile, OPG is awaiting final approval of a separate but similar deep-rock facility at the Bruce Nuclear site for low and intermediate-level, radioactive waste that it first proposed at least 13 years ago. Such waste, is now routinely transported to the Bruce site for what’s also regarded as temporary, above-ground storage. As might be imagined, the idea of burying nuclear waste in close proximity to the shore of one of the Great Lakes, which are shared by Canada and the U.S., has proven controversial.) 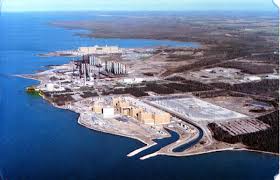 I’m not kidding. Well, maybe a little. But I can’t help but wonder if there’s a special room set aside at Ontario Power Generation (OPG) headquarters in Toronto, or its Western Waste Management Facility at the Bruce Nuclear site, where managers go to pound their heads against a wall.

That would be on account of the never-ending issues being raised and unexpected time being spent to get approval for their plans to build a deep geological repository (DGR) at the Bruce site for the storage of low to medium radioactive nuclear waste.

How long has been since the first group of OPG executive/managers said, let’s bury it, deep? Darned if I know. But it had to have been before they inked an October, 2004 DGR hosting agreement with the Town of Kincardine and other local municipalities in the Bruce Nuclear impact area. Under that deal the municipalities were to have received an estimated $35 million over 20 years, adjusted for inflation as the years went by. But there were conditions attached. First and foremost, they were required to use their “best efforts” to support the proposal and ultimately help it get approved for a construction licence by federal nuclear regulators. Otherwise, the money would stop flowing. They were bought off, in other words.

The agreement also said if certain “milestones” on the road to construction approval were not met, OPG could “defer” the annual payments starting a year after that happened. The money would be set aside in a special account, rather than handed over outright.

In 2004 OPG anticipated the construction licence would be obtained by 2013, OPG’s Nuclear Waste Management vice-president, Lise Morton, reminded the municipalities a year ago, regarding deferment of the 2017 annual payment. She said approval of a construction licence was not expected until “later in 2017.”

Clearly that’s not going to happen, following news this week that the Saugeen Ojibway Nation is not ready to say yes, or no to the project. It’s even questionable if it will happen in 2018, if ever.

OPG’s long-proposed DGR has turned into a proverbial “hot potato” that keeps getting tossed back into OPG’s lap for further information by Canada’s Minister of Environment and Climate Change, Catherine McKenna.

The review panel that held public hearings into the proposal several years ago recommended final federal approval in late 2015. But the former Conservative government did not act on it before the election of a new Liberal government in 2016.

Prime Minister Justin Trudeau has promised improved relations in a spirit of reconciliation between Canada and First Nation people.

The Saugeen Ojibway Nation (SON) was already making good use of the Canadian court system to re-assert their Aboriginal treaty and Constitutional rights. That includes, for example, the right to be consulted about development in their traditional First Nation territory. And in the last few years SON has made another big advance: it is now in a position to consent, or not, to the development of not just one, but two DGRs at or near Bruce Nuclear.

One of them is the already-proposed OPG deep-storage bunker at Bruce Nuclear. The other is a similar DGR for the storage of highly radioactive waste, including used uranium fuel-rods. It may be built in one of two municipalities in southern Bruce County — South Bruce, Huron-Kinloss — still hoping to be chosen as the “host site” by the federally-appointed Nuclear Waste Management Organization (NWMO). Four communities in Northern Ontario, and one in Manitoba, all in Canada’s vast Canadian Shield, are also still candidates to host the used-fuel DGR.

NWMO’s board of directors is composed of representatives of Canada’s nuclear-plant owners, with OPG, an Ontario Crown corporation, being by far the largest. As a result, OPG is NWMO’s senior partner. In 2004 OPG brought the results of a study it had commissioned a Swiss geologist to do to the NWMO table. The study looked at the possibility of siting a DGR in sedimentary rock. For years before that all discussion and research into the long-term storage of used nuclear fuel involved the assumption of a site somewhere in the harder, igneous rock of the Canadian Shield. The study concluded sedimentary rock, such as the Bruce Megablock formation underlying Bruce Nuclear, would be fine. The NWMO agreed, and the Canadian Shield research facility in Manitoba was soon shut down.

These map images, from the Canadian Environmental Assessment Agency, show the location where one, and possibly two deep geological nuclear waste sites could be built. The larger image includes the Saugeen Ojibway Nation’s Traditional Territory, as far south as Goderich, north to Tobermory, and east to the Collingwood area.

NWMO has worked closely in recent years to help OPG through the still-ongoing approval process for its DGR at the Bruce site. That has created no little confusion in the public mind about which DGR is which.

Not surprisingly, SON has been deeply concerned about the possibility two DGRs may be built in its traditional territory.

Meanwhile, both OPG and NWMO have promised the Saugeen Ojibway they will not build a DGR without its approval. OPG made its promise in 2013, before the federal review panel began its public hearings.

In effect, that set up separate, second approval processes. But the SON Chiefs told Minister McKenna in a March 7, 2017 letter, direct nation-to-nation talks with the federal government should happen, leading to “accommodations that will ultimately support reconciliation efforts between us.”

SON consists of the Chippewas of Nawash First Nation north of Owen Sound, and the Saugeen First Nation near Southampton. They have a combined population of about 5,000 members on and off their home communities. A four-day information conference for members about the nuclear waste-DGR situation was held in September and October. More such sessions are planned for 2018.

Somewhere along the way the OPG/NWMO partnership lost control of an increasingly complicated situation. All I can say is you reap what you sow.

Others might also want also to consider the high price the world is paying, and will continue to pay, to feed its electrically-powered, material obsession in this age of consumerism, first, and still, with coal, and now nuclear energy.

As if there isn’t enough to worry about, eh?

One thought on “Paying the nuclear price of plans gone askew”