A sight that’s becoming all-too-typical around the world

It could be a script for a science fiction movie: scientists discover a previously unknown bacterium that somehow evolved in a plastic recycling plant in Japan. This new organism produces an enzyme that eats plastic in a matter of weeks, reducing it to a reusable resource.

The scientists, at the University of Portsmouth in the U.K. and at the National Renewable Energy Laboratory in the U.S., study the bacterium, fiddle with it a bit, and determine the structure of the enzyme. They figure out how it “digests” some of the most commonly used plastics, known as polyethylene terephthalate, or PET, used in the making of plastic bottles. They “inadvertently” make it even better, says an initial media announcement, with apparent wide-eyed wonder, as if that makes it all the more wonderful. I confess it gives me some pause.

But, for now the discovery is widely heralded as a “potential solution to one of the world’s biggest environmental problems” in news media reports, starting with UoP News, the press office of the University of Portsmouth itself.

If this were a movie, you can guess where the story line might inevitably go. But this is real, and if wisely handled, quite possibly a very good thing, offering exciting new opportunities. It’s not necessarily a runaway, Frankenstein scenario in the making as in, “it’s alive! it’s alive!”

Let’s try to be positive. Let’s have some faith. I heard one of the researchers being interviewed, expressing caution about not knowing enough yet about how the newly-discovered organism might behave if sent out into the world too soon. By all means, let’s be careful.

But something has to be done: the world, especially water-world, at the rate of more than a billion plastic bottles per day, is being polluted to death by plastic that takes hundreds of years to break down in the environment. This may be a glimmer of hope.

The timing is exquisite, with the recycling industry now in crisis mode, trying to figure out what they’re going to do with vast quantities of sub-standard, recyclable material China no longer wants. That’s because it’s too contaminated with stuff that never should have been put in Blue Boxes in the first place.

That problem has been getting worse in recent years. Waste-management sorting facilities weren’t catching enough of, well, the garbage. A remarkably high percentage, up to 50 percent, depending on the material, of the world’s recyclables were being shipped to China. But a contamination level of 25 percent was finally too much: China recently brought down the mallet and set a new standard of no more than .5 percent contamination, a level the industry is far from reaching.

Waste management companies have scrambled to find other overseas markets. But they’ve also realized they have to deal with the fundamental, Blue Box contamination problem. That starts with what a lot of people — I confess, myself included — are putting in the single-stream box. But the industry also has to accept blame for irresponsibly putting volume ahead of careful sorting when they knew better, or should have.

The largest waste-management company in North America is U.S.-Waste Management (WM). A Canadian subsidiary, Waste Management of Canada Corporation, has the contract to collect waste and recyclables in the Municipality of the Northern Bruce Peninsula, where I live.

“We use domestic mills in our market area, but also face the same issues with contamination and the declining market value due to China’s new laws,” a company spokesperson told me.

“For all the years I’ve worked in the recycling business for Waste Management, I can tell you that the global challenges our industry is facing these days are without precedent,” said Brent Bell, the parent company’s vice-president of recycling operations, in a WM Media Room blog-post this month.

Bell traced the roots of the current problems back to the widespread change to the “single-stream” system that allowed people to put various types of recycling together in the same blue box, instead of curb-side sorting. Meanwhile, products and packaging became much more complex.

“This complexity has in many ways altered consumers’ understanding of what they think is recyclable,” Bell said. “More and more, non-recyclables are finding their way into single-stream containers – things like plastic bags, organic matter (food, liquid and yard waste), rubber hoses, wires and low-grade plastics. Contamination rates – or the percentage of trash mixed with recyclables – has steadily climbed over the years.”

He spoke of a shared responsibility “to get back the basics and to apply the same discipline we did years ago to the modern recycling programs of today.”

Blue-Box recycling first began here in Ontario, in Kitchener, 35 years ago. It has since become a global phenomenon. Initially it was largely seen as a way of diverting recyclable material away from landfill sites in hopes of prolonging their precious life-span capacities.

But in more recent years there appeared to be a growing sense landfill sites — the burial of vast amounts of garbage in the natural environment – have become obsolete. The closing of Owen Sound’s Genoe Landfill Site, after a controversial expansion-proposal fiasco 20 years ago, strikes me as a milestone in that regard. There has been no search for a new, local site, and clearly no great appetite across the province for new site development.

Owen Sound’s garbage is now being shipped by Miller Waste to a landfill site near Thorold, Ontario. Toronto’s garbage goes to a site near London. At least, in both cases, it’s no longer being trucked to Michigan. But Ontario’s existing landfill-site capacity must inevitably soon run out. 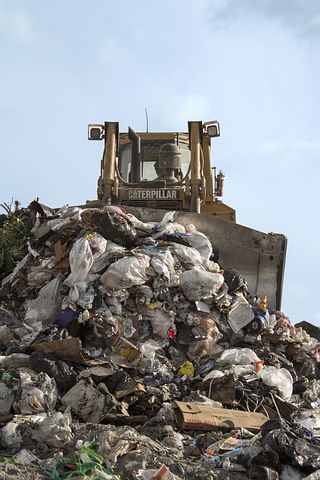 Meanwhile, across Ontario, the pace of recycling that took off after the Blue Box era began, has flat-lined, and even gone down a little, according to the most recent (2016) annual report of The Resource Productivity and Recovery Authority.

The Authority, established late that year is the successor to Waste Diversion Ontario, and the first major step in the Ontario government’s plan to completely rethink how waste is managed. That follows the proclamation of the Waste-Free Ontario Act, 2016 and a far-reaching implementation plan aimed at making Ontario 80 percent waste-free by the year 2050.

Recycling, greatly expanded and enhanced, is crucial to that plan.

“In order to fundamentally change the way we think about waste in Ontario, this strategy outlines the formative actions we will take in the coming years that will help us achieve our goals. It recognises the tremendous environmental and economic opportunities that exist in shifting our mindset and embracing a circular economy — a system in which products are never discarded, but reused, recycled and reintroduced into new products,” said Glen Murray, Ontario’s former Minister of Environment and Climate Change, when he announced the plan.

Who will form the next government of Ontario after the upcoming election, and, if not the Liberals, will they even want to consider carrying on with a waste-management plan started by the Liberals?

The waste-free Ontario plan should not be a victim of political posturing, or, dare I say, put out with the garbage. It is worthy of serious, thoughtful consideration by whoever forms the next provincial government.

The ability of human beings to respond creatively and with open minds to new ideas and discoveries to solve urgent challenges is arguably one of the most important aspects of what we are as an adaptive, problem-solving species. Close that door, and we are finished.