Two packs of coyotes – also called eastern wolves – are howling and yipping to each other from the woods on both sides of the back field. They sound close, not far from where the light of the sun rising in a clear, blue sky has just started to reach the tree line along the north-west side. It’s not usual to hear them out and about this time of the morning. They tend to be more nocturnal. But I’m wondering if they’ve been aroused and excited by the sight of the sun after many grey days. I sympathize.

I don’t worry much about coyotes as long as we maintain a respectful distance from each other.  I was in the garden one evening last fall near dusk when they started to sound quite close in the nearby woods, so I just put down my hoe and commenced to walk, not run, back to the house. I worry more about the very territorial Aussie and keep him inside when the wolves are around. But he’s not here. I was just dog-sitting my old friend for a while. He was good company and I miss him, but no doubt he’ll be back now and then. 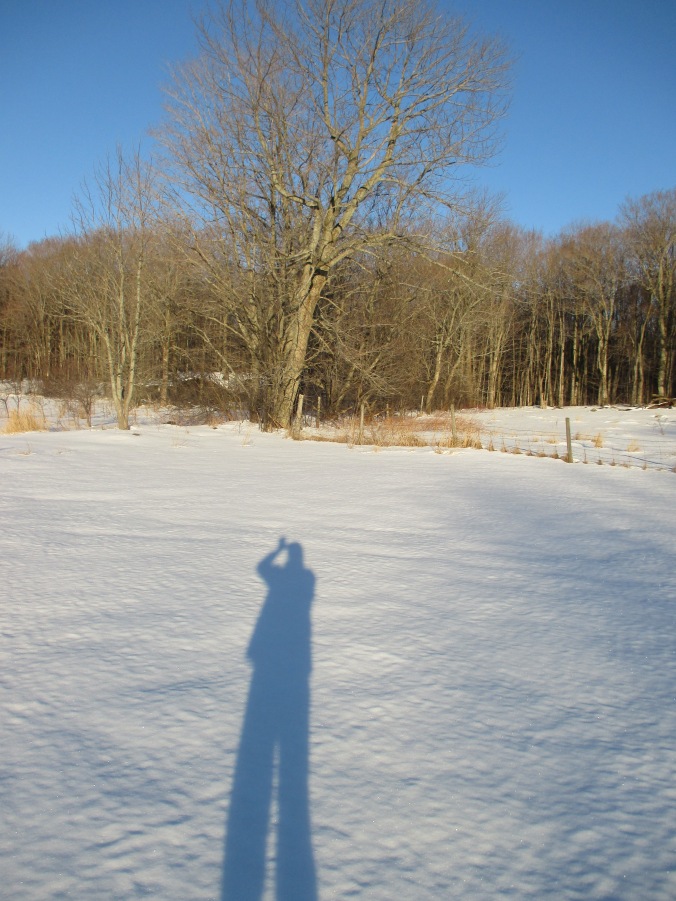 So I went out alone for a short walk into the field and, like the coyotes I suppose, enjoyed some precious, early-morning sun on my face. There’s more stormy, winter weather on the way, that mythical, much-maligned Canadian creature, “the weatherman,” says. Best to get some real, sun-induced vitamin D3 while the sun shines.

I feel for the thousands of Syrian refugees now arriving in Canada in the middle of a Canadian winter. I was born and raised in this country and have had plenty of time to get acclimatized, but I still have to grit my teeth and bear it. With a smile, of course.

Oh, yes, I can recall some fun moments in the snow when I was young, like when a few of us farm boys hitched our toboggans to a horse-drawn sleigh that pulled us along behind at a fair clip while the adults all bundled up ahead in the sleigh sang “Joy to the World.”

I’ve never been much of a skier, to put it mildly, but I’ve enjoyed strapping on a pair of snow shoes – real ones, like the first French settlers who came to what they called New France in the 17th Century, saw First Nation people using: snow shoes made of wood and strips of leather allowing them to move with ease over deep snow. I remember not that many years ago going for a snow-shoe hike on a part of the Bruce Trail, up through Gun Point near Lion’s Head, to look out over the frozen expanse of Georgian Bay, and also down at the village from the brow of the lion’s head itself. The story, you see, is that the first settlers stood on the shore of a natural harbour, looked across the water at the escarpment cliffs to the east, saw the profile of a lion’s head, and gave their new, little-village-home that very name.

And there it remains, quite possibly the most beautifully located community in Ontario. While I’m on that topic I’ll take just a moment to share another memory:

As a freelance local, correspondent at the time, with eyes always wide open for a story that sang the praises of the local area, I happened one morning to be down by the Lion’s Head lighthouse. I noticed a man standing by himself looking out across the water and took a notion to chat him up a bit. He was friendly and approachable, and spoke with an English accent, as we say, oddly enough, now that I think of it.

He said he had been on his way up to Tobermory at the tip of the Bruce Peninsula to take the Chi-Cheemaun ferry to Manitoulin Island for a quiet holiday. But, finding he had plenty of time to spare before the time of the ferry’s departure, he had decided to turn off Highway 6 and find Lion’s Head, just a couple of kilometres east.

“It’s beautiful here,” he said, adding he was originally from England’s cliff-lined Dover coast and it “reminds me of home.”

That was summer, not winter, so I guess I’m off-topic. But there you go.

This winter is nothing like the last two. They were the coldest on record in southern and northern Ontario and many other parts of Canada because climate change had weakened high-altitude, far-northern winds and allowed a “polar vortex” to drop unusually far south. It stayed put for a long time, right over this part of Ontario; right over Hope Ness, if you ask me. Day after winter day, week after week, the temperatures stayed down around -30 degrees Celsius (-22 Farenheit). This winter hasn’t been that cold; and for the last few days we’ve been going through a prolonged mild spell with temperatures several degrees above freezing day and night.

It froze again last night, but by tomorrow the temperature is forecast to go well over freezing again, and then way back down the next day. Weather-wise, we are riding a rollercoaster this winter.

Midwinter thaws are a fairly normal in Ontario and other parts of Eastern Ontario as the Jet Stream ebbs and flows, occasionally pulling warmer air up this far north from the southern U.S.

But what a mess it makes as the snow melts into slush, as we call it. And then after a day or so everything re-freezes, causing treacherous driving conditions, among other problems.

I got home just before dark Sunday evening from a day-trip to visit family in the Guelph area to find the kitchen ceiling leaking. So up on that poorly insulated roof I went with a spade to break the ice barrier that had built up along the roof-edge during colder weather. It was stopping the melting snow-water from draining away properly. I promised myself to be more diligent about avoiding that problem when it turns cold again.

Just a few days before I had gone out in much colder weather to snow-blow the driveway, stayed out too long, and with no cab on Mr. Massey Too, got chilled to the bone. Sometimes I forget I’m not a kid anymore.

Have I mentioned I’m not a big fan of winter? Far be it from me, at an age when every day should be considered precious, to wish any time away by looking forward to spring. That’s what I keep telling myself, anyway.

But I have a message for newcomers to this country: it gets better.