My first response to the scientific “news” about the remarkable ability of dogs to pick up on how people are feeling, as well as other dogs, was something like this: “So what else is new?”

Other people whose comments appeared under on-line news stories about the recently published scientific study in the prestigious journal, Biology Letters, also expressed astonishment: haven’t dog lovers known that for a very long time, probably since the first prehistoric woman many thousands of years ago saw an orphaned, flop-eared, little wolf-pup, picked it up and instinctively cuddled it protectively, and took it home.

Yes, a woman – I know I’ve read somewhere it was likely the maternal instinct that started the whole process of wolf-to-dog domestication, leading to the many various breeds of domestic dogs there are now. And, by the way, that same source noted the endearing, flop-eared puppy characteristic many dog-breeds retain in maturity is a throw-back to that hypothetical, fateful moment.

And then there would have been those eyes, afraid no doubt, but at the same time so hopeful of being loved, so ready to trust and love in return.

The man-of-the-cave may have thought the pup looked like food. But one don’t-you-dare look from her told him otherwise. From then on the pup would have proved its worth, as a territorial alarmist, affectionate pet, and empathetic family member.

Oh, yes, there are exceptions. Every dog I’ve known, for a long or a short time, even just a moment, has had a different personality. They are territorial, pack animals who can act aggressively, or seem to, especially when taken by surprise, say, by a strange car pulling into the driveway. They need some time to get acquainted. You can’t push that with some dogs. And occasionally to be on the save side you come across one you should just leave alone and avoid.

But for the most part my experience with dogs has been good, especially in the sense the recent study has confirmed scientifically for the first time. And about time, one might say.

The research team from the University of Sao Paulo in Brazil and the University of Lincoln in the United Kingdom set up an experiment to demonstrate how dogs gather and process visual and sound clues about how other dogs and humans are feeling. The results showed dogs have a “high level of cognitive” ability to pick up on and react to human feelings, good or bad, as well as those of dogs. Previously, only humans were scientifically known to have that “cross-species” empathy.

I’m inclined to think similar studies involving other animals would most likely have similar results. Elephants, for example, come to mind. I recall seeing two elephants with a carnival that came to a town in this area years ago. They were in the care of an animal trainer of sorts who was giving people rides. I noticed one of the elephants had tears running down his cheeks from what I took to be sorrowful eyes. Yes, the trainer agreed, they probably were tears of sorrow. He said he liked elephants, that they were intelligent animals with deep feelings.

Many years ago I lived on a farm for a while where there were two dogs, both mixed-breeds. They were good friends, always in each other’s company. Their owners let them run loose. The farm was not very far from an urban, Mississauga mall. The traffic on the paved road that went past the farm was sometimes fairly heavy and fast. One day one of the dogs got hit and killed. He was buried on a slope of ground near the house. The other dog lay a few feet above the grave, facing it, day and night, for a long time.

He was grieving, of course. He would look around if someone spoke his name, but he’d stay where he was, keeping his faithful vigil. I can still see him in my mind’s eye. Interesting, the things we remember.

That reminds me of the story of Greyfriars Bobby, a Skye terrier who became well-known in Edinburgh, Scotland, and around the world eventually, as the dog who kept vigil at his master’s grave for 14 years, until he too died, in 1872.

Bobby’s story was the subject of a 1961 Disney movie. The authenticity of the story has been challenged. But there’s no question in my mind that a dog could be that loyal and act that way.

In my own experience I’ve seen dogs I know – Cocker-Spaniel brother and sister, Hunter and Lady – go to people they sense are not feeling well to offer comfort and sympathy.

Aussie, the gentle, friendly yellow Lab, does the same thing. He has been a good and faithful friend. 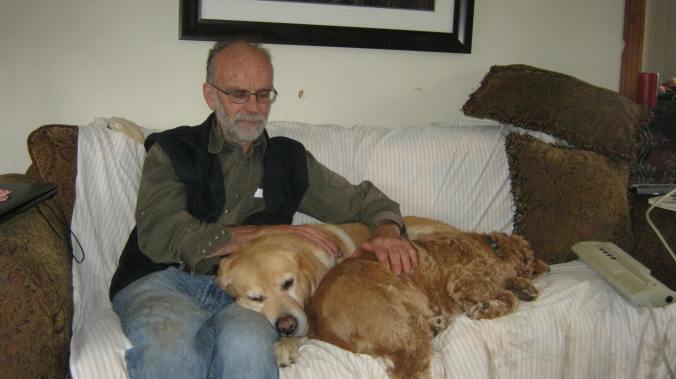 I often think, as well, of Pat and Mike, the two dogs who were my boyhood friends on the farm near Streetsville a long time ago. I was awakened one night by the man of the house who took me downstairs to look behind the cook stove in the kitchen. There they were in a cardboard box, two beautiful, little part-setter pups who were mine to feed and look after, I was told. I did, and we had a lot of fun together over the next few years, Pat and Mike and I.

So, it’s no wonder dogs have been called “man’s best friend” for a very long time. No wonder their intelligent sensitivity, their empathy, is being put to good use as therapeutic companions, on top of everything else.

They keep proving it themselves, time and time again.

Originally published in The Sun Times in February, 2016.