A good friend of mine starts each day by counting her blessings. She finds lot to be thankful for, of course, so she effectively launches herself into positive territory. And thus, no matter how the day goes, she gives herself the edge.

I, on the other hand, woke up yesterday morning on the wrong side of positive and stayed there most of the day. Yes, I know, that’s pretty ironic considering Finding Hope Ness is supposed to be about realizing the promise every moment offers, and living with hope. For, as you may have gathered by now, Hope Ness is more than a place; it’s a state of mind, or rather, a state of being.

This blog is called “Finding Hope Ness” for a reason, though. My friend is already there; in a way she’s an embodiment of it. She fit right in as soon as she arrived here years ago: the birds knew her, the trees knew her; my goodness, even the bear she heard “huffing” not very far away as she picked wild raspberries one day, probably knew her.

But while I have sensed and felt the spirit of Hope Ness, on that very first day, for example, when I rounded a corner on the county road and saw “home,” I still don’t feel I’m doing it justice.

I think it’s fair to say my reputation as a melancholy sort of guy is well-earned. This morning was no aberration. Though I’m usually an early riser, I’m not necessarily a joyful one. Indeed, after a few months of a Canadian winter with yet another grey day, I’m downright seasonally disordered as I push myself to start the morning routine, beginning with the absolutely-essential, minimum two cups of coffee and a few quiet moments to enjoy them.

I was starting to talk to myself, profanely, about having had enough of winter as the snow started to fall heavy again, and the temperature plunged. I’m one of those Canadians who habitually lulls himself into thinking well in advance that the first few days of March will be the beginning of the end of winter. But, in fact, it’s usually a hard winter month.

So, to get right to the point, I was down, and starting to feel sorry for myself, when I heard a news report on CBC-Radio, about the United Nations Refugee Agency (UNHCR) warning a “humanitarian catastrophe” was taking shape: thousands of refugees are effectively trapped on Greece’s northern border as other European countries close their doors. The report spoke of refugees sleeping outside in the cold and rain and mud.

I confess it prompted me to count my blessings, with a roof over my head, a warm bed to sleep in, and food to eat. I also felt proud to be a Canadian, to be a citizen of a country where the national government and many Canadians across the country, in small towns and big cities, worked so hard in recent months to bring 25,000 refugees here by the end of February. That is about the same number now stranded along the northern border of Greece, with hundreds more still coming every day in desperate hope of being welcomed after all.

Canada has done, and is doing, the right thing. Our country is a beacon of hope in a sorely-troubled and divided world. 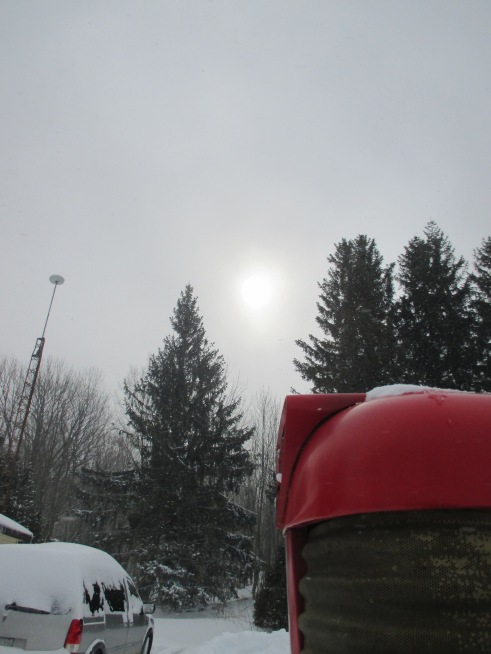 I kept those good thoughts going this morning, when I started up Mr. Massey Too and snow-blowed the driveway. The municipal plow-truck arrived while I was still at it, so I didn’t have to go out again, and the way into Lion’s Head is good to go.

And you know what, the sun is shining through, even as the snow continues to fall and Mr. Massey Too stands ready to do his job again.

Strange light though, eh? Hovering low in the sky there, between the trees – like some kind of mysterious presence.

Interesting too how it changes, when you look at the screen from a different, lower angle. It could almost be the moon in the night sky.