I’ve been counting my blessings this week; and there’s two of them right there, Lila (lily) Marie and Mirabella (beautiful miracle) Dorleon, my youngest daughter and youngest granddaughter. 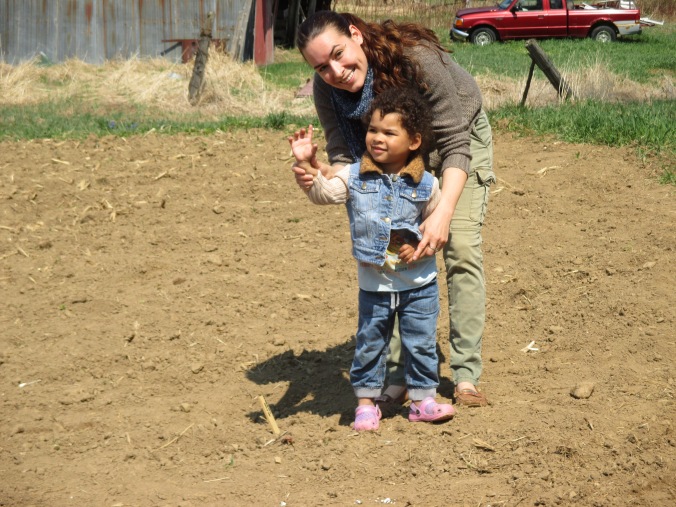 They came for a week’s getaway/holiday at “Grandpa’s farm” in Hope Ness. It was a homecoming for Marie – I still use her childhood name out of habit – who was born here. Her mother, Colleen, used to take her and her sister Kathy for walks around our country block to visit neighbours, including Wilma and Cliff Butchart who lived here at this house I now call home.

Mira had been here just once before more than a year ago when she was a toddler. She’s two now, already talking up a storm, and probably gathering material for her first, break-out novel.

I imagine there may be a whole chapter on Mr. Massey Too, my 1960-something Massey-Ferguson 65 tractor. Seated up there, looking right at home, Mira kept asking Mom to “put money in it,” so it would start moving. I declined, in the interests of child safety, to take her for a ride, but showed her how I made it move. She was quite impressed.

From then on all shadow of doubt, the “making strange” toward this white-whiskered, bespectacled creature with the missing-tooth smile who had showed up occasionally in her life, disappeared. We bonded, the delightful little Mira and I. And she loved the farm, the grass, and all the space to run around to her singing heart’s content.

“She sings when she’s happy,” Marie explained with a gentle smile.

Meanwhile, my daughter impressed me with the wise woman she is in the process of becoming; and I told her so, more than once. Her caring concern about how I was doing was a timely expression of love that was much appreciated. It more than likely had something to do with my productive week – the early-morning plantings of 20 rows of potatoes and four of peas.

I am blessed to have three loving daughters, and a wonderfully interesting and diverse extended family of nine grandchildren and a great granddaughter, the amazing Jorden.

And to think I almost became a celibate monk. But obviously that was not meant to be, because they were. I can’t and don’t want to imagine a world without them.

One thought on “Counting my blessings”