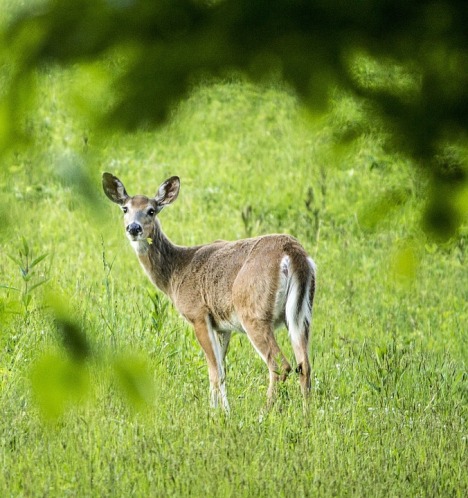 white-tailed deer have been feasting on my sweet peas

I noted with more than passing interest the news that black bear have been making appearances and causing problems in the Shallow Lake area, brazenly killing and eating chickens close to homes, and breaking into wooden garbage containers at Sauble Beach.

There certainly are black bear up here in heavily-wooded Hope Ness, on the Georgian Bay side of the Bruce Peninsula, where I live. I saw a big one from a safe distance crossing the Hope Ness Road out by Bruce County Road 9 a week or two ago just after setting out for a trip to Owen Sound. Most of my  neighbours live out there, compared to where I am at the end of Cathedral Drive. That’s a “No Exit” road that leads to the Hope Bay Forest and a fairly popular section of The Bruce Trail through the mature hardwoods to a wonderful lookout from the Niagara Escarpment cliffs above Hope Bay.

There are a few Beech trees within sight of the trail, but little of those tell-tale claw marks on the smooth, grey bark that bear witness to the presence of bears climbing up to forage on Beech nuts. But in another heavily-wooded area on the other side of the Hope Ness Road where there are more Beech trees I have seen a lot of that.

I never worried much about bears; but I kept an eye out, and an ear tuned to that warning “huff” sound they make if you get too close. I sometimes walked with a big stick, or even a knife on my belt, just in case. I never once in 10 years of walking those woods actually saw a bear, but I’d be willing to bet one likely saw or heard me. As well, one of the dogs especially, had no trouble finding fresh bear poop to roll in with great canine satisfaction.

My few acres, and this old farmhouse, barn, and a couple of other smaller out-buildings, are surrounded by the Hope Bay Nature Reserve and other provincial land being left by Ontario Parks officials to slowly but surely go back to nature. In the fullness of time most of Hope Ness will become the forest-wilderness it once was. That means, for example, that the long, beautiful field that was part of this former 100-acre farm and still winds for more than a kilometre between woods on either side will gradually grow in with trees – first, “thorny trees” and wild apples. There are signs that process has already begun. So, the sometimes literally, back-breaking work of pioneer/homesteaders to clear that land about 150 years ago will be for nought.

Meanwhile, there are signs the field and the woods combined now make an excellent wildlife corridor and habitat for all kinds of wildlife, including bears. I hesitate to say it, but I know there are lots of deer around because they’ve been foraging at night on the several rows of peas I planted in the early spring. Oh well, too late now to put up an eight-foot fence.

Late last fall and this past winter I heard the usual chorus of coyotes howling in the woods, quite close by. Once, in the fall I was out in the front-field garden digging potatoes when they sounded so close I decided it would be prudent to leave what I was doing and walk slowly back to the house.

But this past spring and summer the nights have been eerily quiet. Where have the coyotes – also known as Eastern wolves – gone, I wonder with some concern? Raccoons broke into a bag of garbage I left overnight in the old woodshed when I made the mistake of leaving the door open a few weeks ago. I regard the presence of raccoons here in Hope Ness as unusual, and have never taken precautions to keep them out of my sweet-corn patch. I attribute that to the presence of coyotes keeping them under control. But apparently, I have cause to be concerned this year, with an early corn crop shaping up with the help of this hot summer. If I don’t do something to keep them out the fault will be mine not their’s, and only I will deserve the punishment of losing a good part of my corn crop.

Raccoons likely have an eye on my sweet corn patch

There is an ebb and flow, a natural rhythm underlying the presence of wildlife; but no doubt our human presence and actions one way or another throw it off-rhythm. I strongly believe an attitude of mutual respect on our part especially should be part of the relationship.

Animals are only doing what comes naturally. The current drought conditions in this area and much of southern Ontario must be having an impact on what they can find in the woods and meadows. So, the Ontario Natural Resources and Forest ministry is wise to advise people to take precautions. They are worth repeating. For example, securely store garbage and only put it out the morning of collection, clean barbecues after every use, remove bird feeds, including for hummingbirds, and remove ripe fruit from trees and from the ground.

That last part hit home for me. Family members are visiting for the summer here at Cathedral Drive Farm where, for one thing, there’s an abundance of raspberry bushes growing near the house and elsewhere. Good eating for bears, no doubt.

I think it’s fair to say I’ll be out picking today.

6 thoughts on “Surrounded by wildlife in Hope Ness”