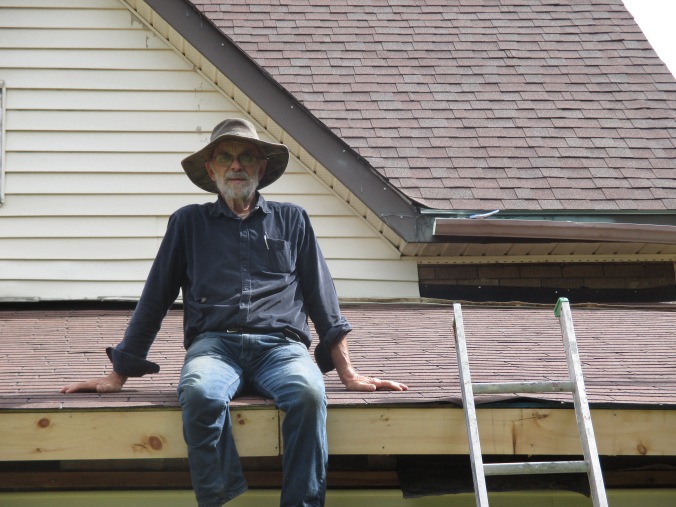 A two-acre market garden to tend, including a tonne of potatoes to dig, beans and ripening tomatoes to pick; and that on top of a daily “to do” list already too long to have any realistic hope of getting it done – surely, that was more than enough.

But there were signs of the world turning toward fall, with time possibly running out to fix and re-shingle the leaking roof on the 1941 “addition” section of this old (1895) farm house. I couldn’t let it go another winter. Besides, that had been the kitchen, the place where Wilma Butchart and her son Cliff did most of their living, and welcomed visitors like me and my young family three-plus decades ago.

Now that I own this “piece of Heaven on Cathedral Drive,” as a lovely note left in my mailbox a week or so ago said, that’s the room I most want to restore and bring back to life as best I can for my grown-up families sake; and for the sake as well of those two kind, generous and extraordinary people we remember so well and affectionately.

I spent a few days mulling it over, and then finally convinced myself: yes, I can do this. Just give me a couple of sunny days and I can tear off those old shingles, replace some chipboard, and put down new shingles.

Hey, I told myself, you’ve done it before. You’re the guy who could always tackle that kind of job. You’ve shingled lots of roofs, mixed enough concrete by hand in wheelbarrows to pour a sidewalk from here to the Hope Ness Road, framed enough walls to build more than a hundred sheds and outhouses, and quite a few basic homes (as long as someone else did the finishing touches). It’s a big part of what I am, a labourer at heart. It’s in my genes from way back somewhere in the Scottish lowlands where the Thompsons lived. I could work from sun-up to sundown, get’er done, lickety-split, just-like-that, and still have time left over for a few hours in the evening to write chapter-and-verse.

Back when first moved to the Bruce I was still young – if you consider late 30s and 40-something young. During the day, all day, in all kinds of weather it was working at a local two-man sawmill, then covering and writing up Wiarton council news, or whatever, in the evening and on into the night for a daily deadline. I was the miracle man; nobody could outwork me.

And so it went for a good many years, through ups and downs, thick and thin. I was the battery bunny that just kept “going and going and going.”

Even when I retired from full-time journalism, I had to keep working, had to keep doing something with my seemingly boundless, restless energy. So I planted a big garden and earned a good reputation for my sweet corn. I even worked construction again for a while in my early 60s.

Come to think of it that’s where I should have got my first clue about the years beginning to take their toll, ironically, when for days on end under a hot sun I carried bundles of shingles up a ladder. Something was wrong, so I went to my good family doctor who told me my heart rhythm, while still strong, was a bit irregular. He suggested I start taking it a little easier.

I can’t say I took his advice, but fortunately that was the end of my roofing career – until last week.

Two days turned into three, and then four, five and six. In there somewhere I became frantic about getting the roof back on, at least covered by what we used to call “tar paper,” before the deluge – so much so that I did the overlap all wrong and didn’t realize what I had done until the first drops of rain started to fall.

“I can’t believe I did that,” I cried, slapping my foolish head, as stapler in one hand, and another roll of felt paper over a shoulder, I clambered up on the roof yet again to lay down another layer the right way just in time.

The job got done. But, like I told my aged and very sensible mother, my youngest daughter, and my new friend, Buddy, “if I ever say I’m going to repair another roof, tell me, ‘no you’re not, Phil, not now, not ever.’”

When all is said and done here’s my point: one of the biggest challenges of growing old is the tendency to think you can still do what you could do when you were young. You can, up to a point, if you pace yourself, take it easy, and keep a clear eye on the pressure-relief valve.

As a wise man I knew years ago used to say, “the hardest thing for a man to face is his own limitations.”

That’s never more true than when you reach the age of seniority and beyond.

Here’s another thing worth remembering: if you’ve worked hard all your life, give yourself a break, you’ve earned it.

A version of this was originally published in The Sun Times in September, 2016

3 thoughts on “A farewell to roofing”