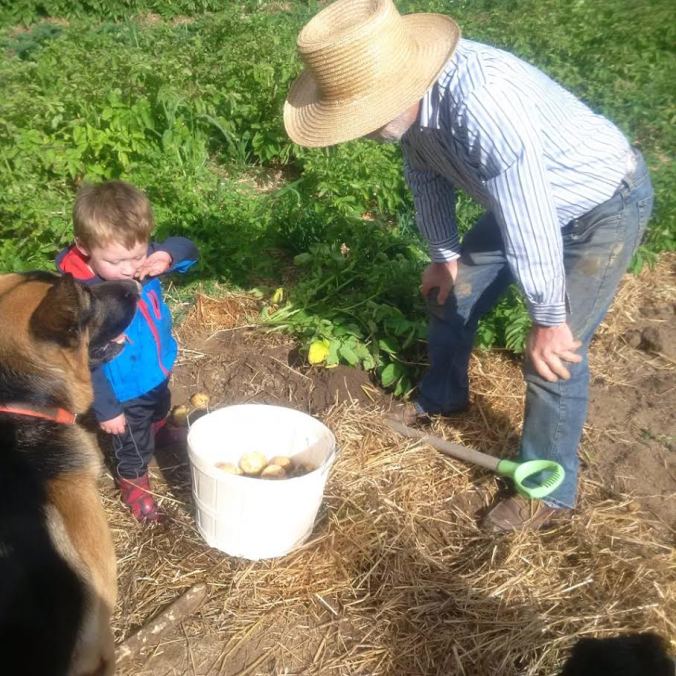 I’m a simple man in some ways. I think my love of growing potatoes reflects that. It takes a certain know-how, and I am proud of what I do to avoid the use of pesticide: thick straw mulch and a lot of hard work. The result this year is my best crop ever, if I say so myself.

But, growing potatoes is not quite “rocket science,” some might say, as if that’s the highest standard of intelligence anyone might reach. Yet, when you give it a little thought how hard can that be? You pack a metal tube full of explosives, point it toward the sky, stand back, count to 10 backward, push a button, and say, “we have lift off,” in whichever language applies at that moment.

Okay, so there’s a few details to iron out and organize to get the rocket to maintain a proper attitude and velocity, reach a prescribed altitude, and hit a target with a nuclear warhead. But if one of the poorest country’s in the world has been able to find the wherewithal to make that happen, for the sake of being able to threaten the United States, you have to wonder: how smart is that?

And for that matter how smart is it for the current President of the U.S. (POTUS) to play that game by threatening in return earlier this week to rain down “fire and fury” on North Korea?

North Korea, formally known as the Democratic People’s Republic of Korea, is that little green place off to the right in this map of the world. The much bigger orange place off to the left is, of course, the United States of America.

They’re an interesting couple those two man-children, with “interesting” used in the old Chinese curse sense of, “may you live in interesting times.”

So, here we are, the simple people of the world, some of us who love growing potatoes, and others who love doing a myriad of other things within the bounds of what is right in the normal course of human endeavour. All we really want is the security of knowing we and our children and their children will have the peace and the time to keep doing what we love.

We’re not out to conquer the world, to lord it over millions of poor souls, or constantly burnish our self-esteem with a daily dose of praise and applause, no matter how many lies we tell, or false hopes we raise.

Yet, now hardly a day goes by when the opportunity to pursue our simple pleasures – in my case, the growing of potatoes, and the sharing of that with the likes of my littlest grandson, Jake, this past week – is threatened by power in places where it ought not to be, power gone or going mad.

There’s not much we here can do about the ruthless, one-man dictatorial regime in North Korea, formally known as the Democratic People’s Republic of Korea. It is not in any sense of the word as we know it a democracy.

We who live freely have relied on, and to a large extent trusted in the hopefully good judgement and intelligence of our elected leaders in high office. And we have relied on the free press to help us hold them to account.

Since the end of the Second World War the world has come perilously close to nuclear war, perhaps more than we know. The Cuban missile crisis of October, 1962, with the real threat of an outbreak of nuclear war between the U.S. and the former Soviet Union, remains as the template in the handling of a potentially world-ending crisis. The U.S. President at the time, John F. Kennedy, was not a perfect human being, but at a crucial moment in history he was a man of very good judgement – the right person at the right time to be Commander-in-Chief.

Apparently there are quite a few people working in the White House who are close enough to see and hear how Donald Trump operates who are horrified at the thought of what he might do when faced with a similar crisis – or just horrified for any number of reasons. There are others too in and around the U.S. government who also feel it is their duty, for the sake of their country, to leak information to the news media. Otherwise, they fear, it might never see the light of day, especially after the firing of former FBI director James Comey.

The current U.S. Attorney-General, Jeff Sessions, recently said “this culture of leaks must stop” as he promised to investigate and charge many more people he calls “criminals.” He speaks sanctimoniously about the leaking of classified information as a threat to national security, as if his boss is not. The boss, that is, who just days earlier had subjected Sessions to on-line Twitter humiliation and criticism for his supposed failure to deal more harshly with “leakers.”

What Sessions called a “culture of leaks” has long been one of the most important ways the free press operates to make sure important issues are revealed and aired publicly, rather than covered up by politicians at all levels of government. I got a few leaks in my years as a reporter in the Grey-Bruce-Owen Sound area. I wish I’d got more.

Invariably the people who sent information my way in an actual or virtual “plain brown envelope” were motivated by a strong feeling there was an overriding public interest in bringing something to light for the good of the community. That was especially true when it involved a misuse of public money, and an abuse of power, or cover-up.

Such people are not “criminals.” In the context of the current political situation in the U.S. history may someday call them “heroes.” That’s if there is such a thing as history.

A version of this was originally published in The Sun Times in August, 2017.