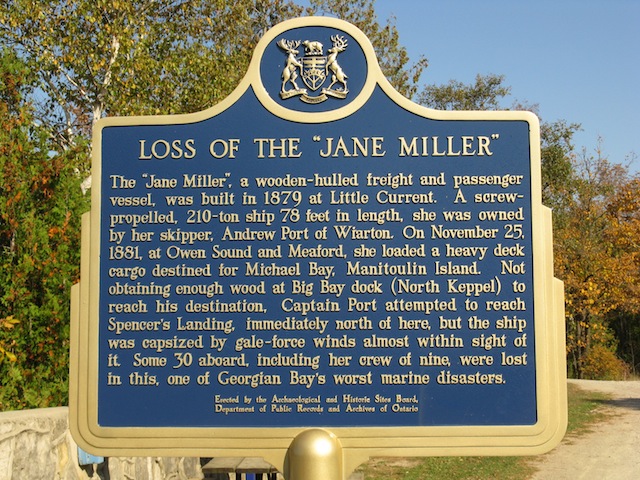 The Great Lakes are North America’s inland sea. They’re actually five seas of varying sizes. The largest and most northerly is Lake Superior. Then there’s Lakes Michigan, Huron, Erie and Ontario. Georgian Bay, though strictly speaking, part of Lake Huron, could also be included as one of the Great Lakes, or sea in its own right.

Its cliff-lined deep, blue waters on the western, Bruce Peninsula side have as stormy a reputation and as long and rich a marine heritage as any of the Great Lakes. 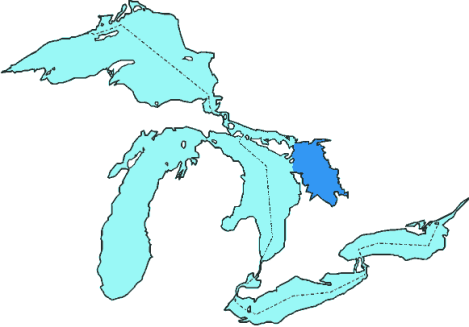 The Great Lakes. Yes, Lake Superior looks remarkably like a wolf’s head, and Lake Huron like a trapper carrying a heavy load of furs (Georgian Bay)

The Chippewas of Nawash First Nation speaks of a time many years ago when people from far and wide in the Great Lakes’ area traveled across the bay to a location, not too far from where I live, renowned as a place of healing.

When non-Aboriginal settlers first came to what used to be called the Indian, or Saugeen Peninsula, “the blue highway” of Georgian Bay was their lifeline. Small, locally-built sailing ships and early steamers carried freight and passengers to and from the various new ports. The many shipwrecks in these waters bear witness to the perils they faced. One in particular, cut especially deep in local memory. 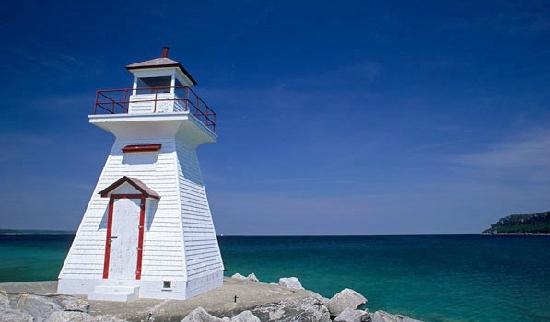 Replica of the Canada Coast Guard lighthouse at the entrance to Lion’s Head Harbour. The replica was built by Lion’s Head high school students about 30 years ago, after the original lighthouse was unexpectedly demolished by a coast guard crew who came across the bay from Parry Sound early one morning. In the distance are the cliffs that gave the village it’s name. If you look closely you may be able to make out the lion’s head outline of the rocks near the top of the cliff.

The loss of the Jane Miller, somewhere in Colpoys Bay near Wiarton was, and to a large extent, remains a mystery. For a little less than 136 years the exact location of the last resting place of the small, “package and passenger” steamship was unknown after it foundered heavy-laden with cargo and passengers during a snow storm on November 25, 1881 on its way to Wiarton from Meaford.

From Wiarton it was supposed to go north up the east coast of the Bruce Peninsula through stormy Georgian Bay for a stop at Lion’s Head, before heading to Providence Bay, Manitoulin Island. Her last known stop after embarking from Meaford was the dock at Big Bay northeast of Wiarton to pick up fuel-wood at 8:30 p.m. that fateful night.

“Witnesses on shore last saw what was assumed to be the Jane Miller heading in the direction of Wiarton as it passed through the gap between White Cloud Island and the mainland sometime after 9 p.m.,” noted an Owen Sound Sun Times article this past week.

And then she was gone, for 136 years. No bodies were ever found.

A flurry of 136-year-old articles, written in the Victorian style of the times, that appeared in the local and Great Lakes press of the time convey the real feelings of communities all-too-familiar with the perils of the inland seas of the Great Lakes:

“FEARS FOR THE SAFETY OF THE ‘JANE MILLER” was the headline over this brief report in the Meaford Monitor, Friday, December 2, 1881, a week after the Jane Miller left that port:

“There has been considerable excitement over the ‘JANE MILLER’ which left here on Friday last for Providence Bay, Manitoulin Island. She was to call at Wiarton, and had a cargo for Lyons Head (sic), but nothing has been heard of her from either port, though the telegraph has been freely used for news of her whereabouts. There is a rumour that packages of’ fish have been discovered on Hay Island, near Wiarton, but no one can tell if they belong to the cargo of the missing boat. Mr. Train of this place has received a letter from Lyon’s Head, dated on Monday, and saying that the MILLER had not been there . . . Further news is anxiously awaited.”

Two days later this “special telegram” was sent from Wiarton:

“NOT A SOUL SAVED.
The Loss Of The JANE MILLER Confirmed.
Wiarton, Ont., Dec. 4. — The tug TOMMY WRIGHT left Owen Sound Saturday morning, to look around the islands in Georgian Bay for some trace of the missing steamer JANE MILLER. She arrived here tonight, having on board four bedsteads, three oars, some pins out of the life boat, a piece of a mast, a steamer’s gang-plank, and a pair-rack. All were identified as having belonged to the JANE MILLER. She also had some kegs of butter with Captain’s Port’s brand on them. All these articles were found on White Cloud Island, and are ominous of the fate of the missing steamer . . . So far as can be learned the following were on board: Andrew Port, Captain;Richard Port, Mate; Fred Port, Purser; J. Christison, engineer; Alex. Scales, Wheelsman.  And four deckhands whose names cannot be ascertained, all from the village of Wiarton and of the vicinity.
Passengers: James Warner; James Hallock; Lyman Vader, and a man and wife; all from Meaford. and bound for Michael’s Bay. A number of passengers, also from here, for Lyons Head, to work at Watts’ Mills, were on board, but the names are not given.”

And this excerpt from an article in the Wiarton Echo on December 9, 1881, on the occasion of a publication of an obituary for members of the Port family:

“The above announcement speaks for itself, and tells to our readers that all hope that this unfortunate vessel might have reached a safe haven is now at an end and there is no room for doubt that she lies at the bottom of the Georgian Bay, having carried down with her at least 28 human beings. The calamity, viewed in any light is an appalling one; but the fact that the ill-fated boat went down almost, we may say, within sight of Wiarton adds more poignancy to the sorrow which all must feel at the immense sacrifice of life which has taken place.”

It turns out the location of the Jane Miller was relatively easy to find with the help of modern, underwater search equipment. A team of three, veteran American searchers actually made the discovery July 27 this past summer. They were searching under a permit from the Ontario Ministry of Tourism, Culture and Sport, of all things, according to the Sun Times report.

I personally find it touching how much these accounts reflect an appreciation of the value of human life at the time in those local communities. That does not seem to be the case in many parts of our world now.

A tip of my toque to the three searchers for delaying the announcement of their discovery to coincide with the anniversary of the sinking, and for not revealing the exact location. But obviously it won’t be at all difficult for the curious to find again.

The sooner the Ontario governments acts to protect the site under the Cemetery Act or other appropriate regulation the better. The underwater burial site of the Jane Miller should not become a tourist attraction, its spirit and legend diminished year-by-year by degree by too much exposure, until nothing remains. Let them rest in peace, undisturbed.

One thought on “The Jane Miller is found, may she rest in peace”