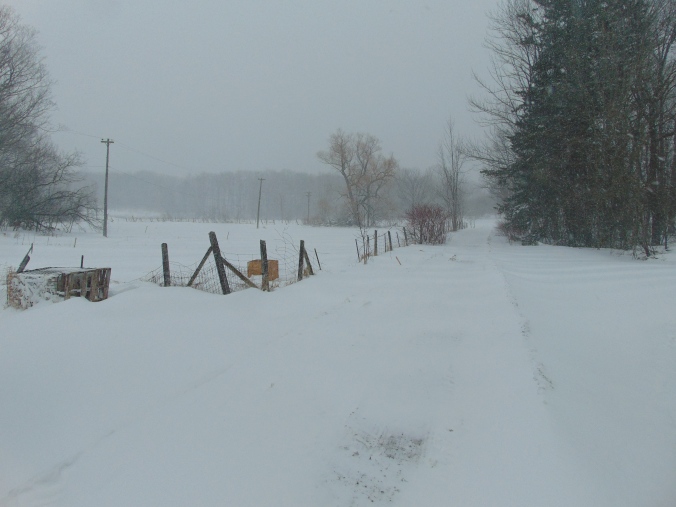 The local store where I buy my Big Beautiful Boy’s dog food was fairly busy one morning earlier this week. Housed in an older building, the décor steeped in Canadian, farm-store heritage, it’s staffed and operated by folks who call you by name – or soon will, if you’re new. If they say, “have a nice day,” they really mean it.

I soon found my Buddy’s food. Then I thought I’d take the opportunity to show my driver/friend, also a gardener, around the selection of seeds on display. But something was missing — that one thing I wanted to get that would declare, finally, that spring had arrived.

Moments later when my turn came at the counter I raised that matter:

“I was hoping to get a 50-pound bag of seed potatoes,” I said in all innocence, looking one of the always helpful associates straight in the eye.

But suddenly I was aware that, at least within hearing distance, the store had gone silent. I had a sense too that many eyes had turned in my direction. Meanwhile, the kind and considerate associate appeared to be momentarily at a loss for words. He likely didn’t want to embarrass me in front in public and was taking a moment to chose his words carefully.

“We don’t have any seeds potatoes yet,” he said quietly and gently. “It’s too cold.”

Another, one of the proprietors, stepped in to explain the old, barn-like storage building behind the store was unheated and they couldn’t risk any of the 400 bags of potatoes they had on order freezing. They hoped to have them by the end of this month.

I understood perfectly and sought to prove it. “And one of those bags is mine,” I said, launching into my now-standard long story about how I’ve often started planting seed potatoes by mid-April, how they’re a hardier crop than lots of people think – and even how I mulch my potatoes with straw to control the dreaded Colorado Potato Beetle.

I could see, as usual, eyes were beginning to glaze over. “Anyway, to make a long story short (as I too-often say) I’ll be back at the end of the month.”

As any well-seasoned farmer or produce gardener like myself will doubtless know, this is anything but a normal spring. Indeed, so far, it’s fair to say this is no spring at all, three weeks after the sun’s official crossing of the equator.

I plowed the driveway for the second time in two days this morning so family visitors could find their way home two hours south through the blizzard before they got snowed in for the weekend. It might as well be mid-January, I said to myself as a biting wind from the north-east blew a cold, hard snow into my exposed face. A hole in a well-worn mitt was letting in the slightly sub-zero c old air and my little finger was going numb. There’s no shelter atop my trusty old tractor. Three hours later I could have plowed it again. The snow just keeps coming.

Meanwhile, the Environment Canada forecast doesn’t bode well at all for the approach of warmer, sunny weather any time soon. This blizzard is supposed to be followed by freezing rain later today and tomorrow, and the likelihood of power outages.

For goodness sakes, it’s April 14th in Hope Ness, just south of the 45th Parallel, halfway between the Equator and the North Pole. This is not normal. But it’s like Mother Nature has finally, once and for all, had enough of human stupidity and decided to cancel spring. Nothing would surprise me anymore.

But even if and when spring arrives for real, and the last vestige of snow-cover has melted away, it’s a big mistake to get on the land too soon with cultivating equipment. Patience, I tell the old Ferguson cultivator. No, really, I did. I have a habit of talking to farm equipment.

At this rate the 2018 growing season in this area is already close to a month delayed. I’ll be lucky to get snow peas and potatoes planted in the first week or two of May, and I’d be willing to bet many other local farmers and gardeners are in the same predicament, at the mercy of increasingly unusual, unpredictable weather.

It has a lot to do with the behavior of the Jet Stream, which insists on hanging around way too long, way too far south for this time of year. When was the last time – if you’re a baseball fan – you saw major league ball players wearing balaclavas to keep warn during games in Texas and Baltimore, Maryland?

There are still a lot of people who doubt this has anything to do with global warming/climate change caused by the modern consumer-culture and the unsustainable burning of vast quantities of fossil fuel to power it. For example, more than a third of Canadians think climate-change science is still inconclusive, or don’t believe it at all, according to a recent Abacus Data poll commissioned by Canada’s Ecofiscal Commission. That’s a group of economists advocating for practical ways to fight climate change.

An overall 61 percent of those polled nationally regarded the evidence for human-caused climate change as either conclusive or “solid.”

But 27 per cent thought there was some evidence, but it’s not conclusive. The remaining 11 per cent felt there was little to no evidence human-caused climate change is real.

Support for more action on climate change was highest in the Atlantic provinces at 69 per cent, followed by Que. at 66 per cent and B.C. at 65 per cent.

Just 57 per cent of people in Ontario, and 56 per in Manitoba and Saskatchewan favored government putting more emphasis on fighting climate change. In Alberta that percentage fell to 46 per cent.

But despite the overall majority support for climate-change action it did not rank at all high as a top public policy priority for those polled. On the contrary, climate change was near the bottom of the list, at 21 per cent, compared with improving health care services, at 46 per cent.

But, regardless, I will try to make the best of it, not let it deplete my growing spirit. I will plant my peas, potatoes, beans, corn and squash with joy in my hear when the time comes, and look forward as always to baskets of beautiful things that grow in the garden.