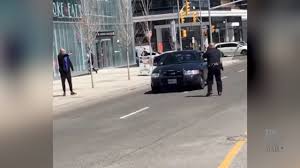 A moment from the video taken by a bystander.  Toronto Police Service Const. Ken Lam is on the right near his cruiser. The suspect on the left is holding a dark object in his right hand, pointing it at the officer. Less than a  minute later Const. Lam had taken the young man in custody without firing a shot.

The first time I saw that now-famous video of Toronto Police Const. Ken Lam arresting the man who had just allegedly run down 24 people in Toronto I, like a lot of other people, was impressed for all the obvious reasons.

Const. Lam’s courage and patience during a highly tense confrontation with the suspect, 25-year-old Alek Minassian, has received widespread praise as remarkable, including in the U.S. and elsewhere around the world.

Const Lam has not spoken publicly about what he did, and won’t for quite some time, Toronto police officials say, because he will be a key witness when the case is heard in court. He is said to be insistent he’s no hero, and was “‘just doing my job,’” they say.

Minassian has been charged with the first-degree murder of 10 people, and other charges related to the injury of 14 others when the rental van he was allegedly driving mowed down one person after another on a section of Yonge Street sidewalk last Monday afternoon.

During the 37-second encounter with Const. Lam some distance from where the deadly rampage occurred, Minassian was holding a dark object in his right hand and pointing it at the officer. He tried several times unsuccessfully to provoke him into firing his gun with a behind-the-back drawing motion. Const. Lam couldn’t hear what Minassian was shouting over the sound of his cruiser’s siren, so he calmly opened the door and turned it off. Minassian said he had a gun in his pocket. Const. Lam said he didn’t care about that and repeatedly ordered Minassian to “get down.”

“Kill me, shoot me in the head,” Minassian called out.

In the midst of that exchange a bizarre moment occurred when several pedestrians, walked out from behind the damaged white van on the sidewalk, looked briefly at what was happening, then continued on their way.

That no doubt added to the information Const. Lam was somehow gathering in and processing. He holstered his gun and took out his baton. Moments later Minassian was lying face down on the sidewalk as the officer put him in handcuffs.

Const. Lam, a traffic enforcement officer, handled the situation very well indeed. He did all the right things, in accordance with the training Toronto police receive,  to use as little force as possible.

But there was something else I couldn’t quite put my finger on, something important about the way he took the encounter to a peaceful conclusion, resulting in the taking into custody of a live suspect, instead of a dead one lying in the street.

That, unfortunately, is not usually the case in a world where such terrible crimes are becoming more prevalent. But now, because of Const. Lam’s actions, law enforcement and other professionals anxious to learn more about why will have an invaluable opportunity to do just that.

That may turn out to be Const. Lam’s most important contribution to law enforcement, leading to the saving of many lives in years to come.

But like I say, there was something I couldn’t quite put my finger on about how he managed the peaceful arrest of Minassian.

I found myself remembering some of the police officers I’ve known, or had contact with over the years. One in particular stood out:

Many years ago, when I was a university student in Waterloo I used to drive my, dual carb, Triumph Bonneville motorcycle back and forth along the 401 Highway to a part-time job cutting carpets in north Toronto. As the weather got colder that fall and early winter, I got into the bad habit of tailgating transport trucks to get some shelter from the wind.

One night I got pulled over by an OPP cruiser’s flashing lights. The officer, a well-experienced veteran of traffic enforcement, cleared away some papers and sat me down in the front passenger seat.

“You know,” he said, looking at me with heartfelt concern, “I’ve seen a lot of terrible things on this highway, things you can hardly imagine: people who were alive and well minutes before, but ended up just bits and pieces on the pavement.

“I wouldn’t want to answer an emergency call one day and find you like that. Please don’t do that any more.”

He could have given me a ticket. He didn’t. But that’s not the point. I never tailgated a truck again. He may have saved my life.

Now, somebody may call me a “bleeding-heart” whatever, but I firmly believe that somewhere in the encounter between Const. Lam and Alek Minassian a vital connection was made.

Const. Lam didn’t want to end anyone’s life, because life is precious and sacred —– everyone’s life. And I dare say that great Truth, deeply rooted in his heart, is above all what guided him.

It may have been the first time in a very long time a terribly disturbed, unhappy young man felt his life mattered.

Better, of course, that he had felt that before the tragic events of this past Monday took place.

I have believed for a long time that the great number of people among us who suffer from desperately low feelings of self-worth is a serious social, as well as personal, problem. 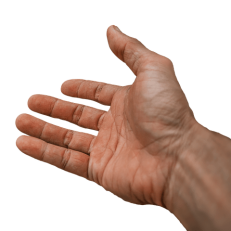 A caring hand can do wonders

Not that such people are bound to commit terrible crimes. More often than not their despair is turned inward, to self-destruction. But unless we all do more to help create a more caring world, whenever the moments challenge us to do so – as Const. Lam did – I’m afraid there’s not much hope the world will become a more peaceful, safer place.

But, even as I say that, I think Const. Lam’s example is inspirational, and reason to be hopeful.

Also, inspirational and hopeful was the way the people of Toronto, one of the most multi-national city’s in the world, came together in their grief, with heartfelt messages of support for the victims and their families, and each other.

“Love for all, Hatred for none,” was one of the prevailing messages at the spontaneous memorial that grows day by day in the vicinity of the tragic event.

There was, there is, a hopeful message there too after all for this troubled world. 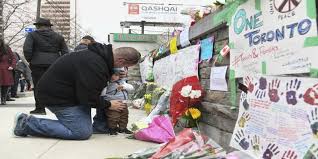