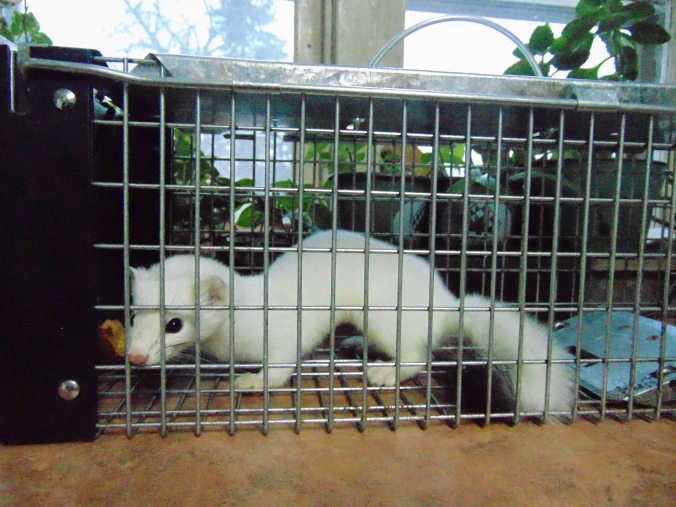 A stoat, or ermine, caught in my live trap, soon to be released back into nature

I got quite a surprise when I checked the live-trap this morning in the basement cold room where I store produce from last summer’s garden. I’ve been setting the Havahart trap with pieces of squash for several weeks to control an over-abundance of red squirrels getting into this old farm house. So far, I’ve caught seven of them, which I take down the road, far enough I hope that they won’t return.

But this morning, when I saw the trap door had dropped and I took a closer look, I was amazed to see a pure white creature that looked far more like a small weasel than a squirrel. The long, sleek torso was the big difference, though, otherwise, there were many similarities as you can see.

Another difference was its reaction upon seeing me: whereas the red squirrels more often than not remain still, as if shocked at the site of me, for a while, this animal became more active and energetic in its efforts to squeeze through the metal mesh of the cage.

Needless to say, when I brought the cage upstairs and into the kitchen on the way to the back door, the dogs were much more interested than usual in seeing what was in the cage, this time. Not sure what it was, I thought I’d take a moment to snap a couple of photos and put the cage up on a counter by the west-facing window.

The thought crossed my mind about not letting it go right away, at least until I found out what I had caught in case it was something rare or endangered. But I thought better of that idea. The sooner it was set free, the better.

So, the four of us – me, with the creature in the trap, and my two, excited dogs went for a longer walk than usual down Cathedral Drive into the woods. When the dogs had gone ahead, and were busy sniffing something out on the roadside, I opened the trap, and the sleekit, white creature was out and up a tree – way up – before the dogs knew what had happened. I don’t drive anymore, and it wouldn’t do to ask someone to come and give me a ride to take the trap and its contents farther away from the house. It might take a while, and given the number of times I might have to call, I feel like I’m asking too much. So, I do what I can, knowing there’s a good chance the released red squirrels may find their way home; and this morning’s surprise, as well.

Some research on the internet clearly showed I had caught a Stoat, also known as an Ermine, the name more often applied to its fur which over the centuries has been used by aristocrats of the Eurasian nobility, secular and religious, to line their ceremonial robes. I suppose it has been used in high fashion as well.

Stoats are not considered an endangered animal. On the contrary, they are classified by the International Union for the Conservation of Nature (IUCN) as of “least concern” because of their relative abundance. They are native to the vast Eurasian land mass and are thought to have migrated to North America about 500,000 years ago. They are found in woodland areas throughout Canada and Alaska, and as far south in the rest of the U.S. as northern New Mexico and Arizona. They are not prevalent in the Great Plains, but are at home in the woodland regions of the Great Lakes.

Stoats have also earned a considerable reputation as predators. For example, they’re able to catch and quickly kill wild rabbits 10 times their weight. As a result they were introduced years ago to New Zealand in hopes they might bring the rapidly growing rabbit population there under control. But they also decimated the bird population. My first thought when I read that on-line was of the sudden lack of small birds around my property this winter, compared with the previous two years. There certainly is plenty of feed for them, what with the quantity of squash and pumpkin seeds in the compost pile. The squirrels have been having a feast, so maybe their presence has scared off the birds. Or the dogs. Or my unexpected guest this morning.

I’m no expert, but I can’t help but wonder if the obvious big increase in the local Red Squirrel population is a result of the heavy hunting of Coyotes in recent years, to the point of apparent extinction. Up until a couple of years ago it was common to hear the distinctive, high-pitched howling of coyotes in the Hope Ness woods, especially near sunset. But since then, and still, the woods have been eerily quiet.

Coyotes are often regarded as “nuisance animals” because of their increasing interface with humans, especially in urban areas. Their prey is mainly small animals, like mice and other rodents, but under certain conditions, like little snow cover, they can take down larger ungulates (hoofed animals), including farm livestock.

Coyote attacks on humans were long regarded as extremely rare. But in recent years reports of attacks on humans in Canada have been widely publicized. One of the first was the death of Canadian 19-year-old folksinger Taylor Mitchell in October 2009 as she hiked on a trail in Cape Breton Highlands National Park. There were several attacks by coyotes in Canada in 2018. Two were in the vicinity of Vancouver, one that involved serious injuries to a three-year-old boy, and one happened in Montreal. Obviously, that raises serious concerns about the need for people to be aware of the danger, however remote, and take precautions.

But should coyotes be exterminated in their natural habitat? The balance of nature, and the possible negative effects of upsetting that balance surely needs to be taken into consideration.