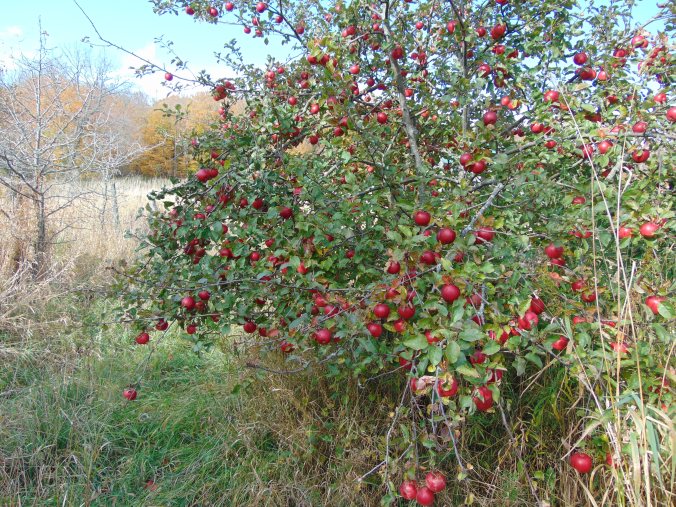 Hope Ness, late October, 2019. The heart cries out with joy at the sight of such a tree.

A hard frost covered ground-level Hope Ness this morning as the dogs and I went for our early-morning walk. ‘Early morning’ is a relative thing though: as one day follows another it gets a little later and dusk a little sooner as the sun goes south. The dark, clay-loam soil I turned up in the front field a couple of weeks ago was white with the fragile lightness of frozen dew as the sun began to rise above the line of the woods to the south-east.

I think about all that still needs to be done around what I dare to call, “the farm” when talking to family, as in, “when do you think you’ll get a chance to come up to the farm again?” That’s before deep winter settles in and travel up here becomes even more of a chore. No pressure here. They have their lives to live.

Buddy, as is his habit, has gone way ahead on the morning journey to the touchstone. I call him back, stopping him in his tracks, turning him around, as he obediently trots my way. There are bears in those woods – I saw one crossing the trail in the woods not more than 400 metres ahead a few weeks ago. He’s a big boy, my shepherd, but it would break my heart if he got into a fight with a bear and came out the worst for it.

“Good boy,” I say when he gets to my side again, waving his tail in pleasure at the words he most cherishes, rubbing up against my legs for a moment before going back to sniffing with much canine interest the various wild smells along both sides of the road. I glance around to make sure Sophie, the mischievous cockapoo, is nearby.

We are the only things moving so far this morning, or so it seems. There is a profound stillness over the land and in the air. Not a breath of wind stirs in the countless fall leaves. Here and there a one or two fall with a last flutter, As usual I think of things over which I have next to no control, matters close to home, and far away in the world.

“What’s the point?” I ask myself. All my worrying, or anything I do, write, or say, won’t matter. I should know better; I do, know better. I’ve said it often enough myself, alone or to anyone who might be listening, you never know when the opportunity to make a difference, close by or far away, will present itself.

My recent discovery of a wonderful grove of wild apple trees, still abundant with many-flavoured sweet fruit, brought joy into a dear friend’s day, and mine too, when we shared the experience. And there will be many jars of apple sauce and sweet cider to make and enjoy, and gift. Of such moments, the good life is made.

I thought, that first sunny day of recent wild-apple discovery, that if I could only bring the world there, what a difference it could make in many other lives: just to see how life persists in being wonderful.

But still, I confess, I feel a heaviness, a sense of foreboding. About what, I’m not entirely sure. Maybe it’s just me, and a melancholy brought on by the realization, based on certain signs, that my time is winding down. It’s not so much death that worries me, as the fear of what comes after, as in ‘what dreams may come.’

Oh, ‘what fools these mortals be’ indeed, those of us who have felt and acted like we were going to live forever.

To any young person I would offer this advice above all, don’t waste yourself in vain pursuits, on ‘making it’ in whatever way worldly success is defined. Never doubt that how you have lived your life for good or not will go with you in spirit as you travel on. So, make amends while you can, and be the person you were always meant to be.

I wonder to if the sense of foreboding I feel is about what the future, near and far, holds for my children and their children, the human family, and our home: this once and still beautiful, precious gift, this little blue-green jewel of a planet.

In the aftermath of the recent Canadian federal election I fear also for this good country, this community, this “village,” as literally translated from the Indigenous language that gave Canada its name. I’ve often described Canada as a shining example to a world now plagued by hatred and divisiveness of how people of many different nationalities and cultural backgrounds can live together in peace and goodwill, celebrating our diversity.

I’ve often said Canada is not perfect, that it is “a work in progress, but it works.”

But not since the days of the two referendums in Quebec on the question of separation from Canada have I had such concerns about national unity. The resurgence of the Bloc Quebecois, a pro-sovereignty party after all, is perhaps reason enough. But the surge of separatist sentiment in Alberta especially is now also deeply troubling.

I will say this as well: that it took Conservative leader Andrew Scheer so long to file papers renouncing his life-long American citizenship was reason enough for me to not support that party. And it didn’t matter that he went around during the campaign wearing a jacket emblazoned with a Canadian flag.  That was an empty gesture so long as he didn’t respond to questions about his citizenship directly and honestly. “Nobody asked me,” was the lamest and weakest of possible responses after the Globe and Mail broke the story in early October. Scheer filed papers to renounce his U.S. citizenship in August of this year. He said during the campaign his intention was to have the process of renunciation take effect by election day, Oct. 21. There was no announcement before that date that it had indeed happened. Had Scheer and the Conservatives won the election and formed the Canadian government, Canada would today have an American citizen as its Prime Minister. That was an issue for me, and, I daresay, other Canadian voters.

Donald Trump and Vladimir Putin at their  now infamous Helsinki summit in 2018 where Trump cast doubts on Russian meddling in the 2016 U.S. election despite U.S. intelligence agencies saying it happened.

Meanwhile, throughout the recent election campaign, the proverbial ‘elephant in the room,’ was largely ignored. That was, and still is, the continuing threat a Unites States led by Donald Trump poses for Canada, especially if he is re-elected. How that could manifest-destiny itself should not be underestimated in a world undergoing huge changes in the global balance of power. Call it puppeteer Putin’s plan. Anyone who can connect the dots should be able to see where that could lead for Canada.

My hope is Trump has vastly underestimated the intelligence of the American people, especially his so-called “base.” Otherwise, the way ahead is fraught with all sorts of unimaginable danger.