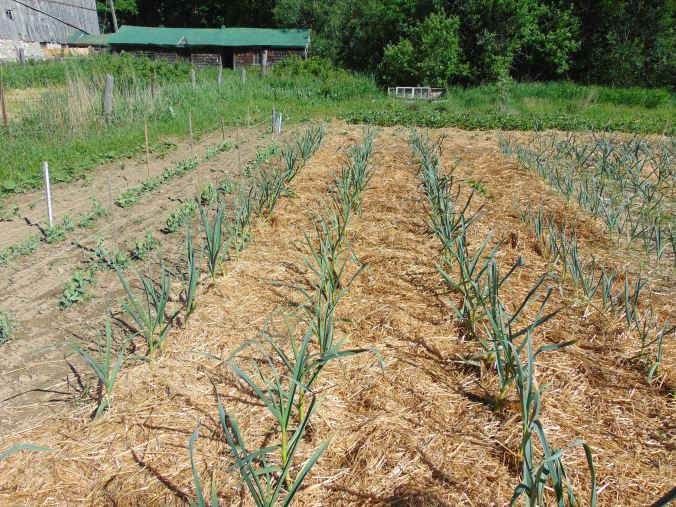 A well-mulched, healthy garlic crop in Hope Ness after a difficult winter and cold spring. A good crop in Ontario, Canada for challenging times. Two rows of peas on the left are coming along slowly in the ‘unseasonably’ cool weather. But they are also hardy.

This spring a lot of people decided for various reasons related to Covid 19 to plant a garden and grow their own food. They may have had some past experience, or not, in which case they likely did a certain amount of preparatory research and planning in hopes of a bountiful outcome.

But I suspect no amount of homework prepared them for the realities of this growing season. So far it has, and continues to be a shock, even for this old gardener. It depends where you are to a large extent. That comment reflects my experience here in southern Ontario near the 45th Parallel halfway between the Equator and the North Pole. By this date, nearing the end of the second week of June, seeds and transplants would normally be safely in the ground and growing nicely.

Now, admittedly my use of the word ‘normally’ refers to an experience that in recent years was already showing serious signs of being out of date on account of climate change. The tradition of sowing or planting tender crops like beans, sweet corn, squash and tomatoes on or near May 24 was never an absolute certainty. The underlying rule of thumb was always “wait until all risk of frost has passed” before planting such crops. But more than that, soil temperature was also vitally important, as I noted in a recent post. Tender-crop seeds, like corn and beans, need a minimum of 21 degree Celsius to germinate. Otherwise, especially if you favor untreated (no fungicide) seed, as do I and many other gardeners, the seed will rot in the ground.

I’ve learned my lessons the hard way in my eagerness to get planted. This season here in Hope Ness, with ‘unseasonably” cool weather through much of May, I waited until the first week of June to plant sweet corn (always my favorite food and crop). That was even though the soil temperature was still iffy. But if you don’t plant corn by the end of the first week of June, you might as well not bother. So, I did, plant it, I mean — row after row after row, one untreated, careful seed at a time adding up to several thousand.

There had been a couple of weeks without rain, but the days were warming up, and a couple of warm days, and even one hot one, prompted a few seeds to germinate. Hope was in the air. There was going to be a sweet corn crop at 92 Cathedral Drive after all.

But then, the climate-changed, unstable Jet Stream plunged down below the Great Lakes region yet again and with it, the dreaded Polar Vortex. Yes, that has become the ‘new normal.” For some reason the Jet Stream/Polar Vortex partnership has an obvious affinity for the Great Lakes. Also, that massive, almost-inland sea known as Hudson Bay jutting way down into central Canada seems to be a big help in getting those two other dance partners that much farther south.

Much of central Canada and the eastern U.S. is in the grip of the Polar Vortex

As I write this, the Jet Stream has come down so far south, well into the U.S. Midwest, that it doesn’t show up on Environment Canada’s on-line weather maps until it heads north again along the eastern seaboard of North America. The interior of Alaska and Canada’s far-north shows a daily forecast warmer than southern Ontario.

Hope springs eternal; so, against all reason, when temperatures go up as forecast next week, I still imagine I might see the rest of the corn germinate and bravely show its tender, little, green shoots above ground.

And the beans. Have I mentioned the beans? Planted mainly in the last week of May and first week of June, numerous rows of green and yellow bush bean seeds were struggling to germinate and emerge in the drought. Every day for more than a week I carefully watered those rows by hand with water from a dug well. I made sure I let the barrel warm in the sun before dipping in the watering cans. And I waited until the late afternoon or evening sun was low in the persistent, clear, blue sky. Beads of water on the plant leaves act like a magnifying glass concentrating the sun ray’s and can cause cell damage. The risk is greater with the midday sun. All that careful effort worked. The bean plants survived the drought.

It remains to be seen if they will survive the “unseasonable” cold snap.

But I look on the bright side: the hardy and semi-hardy crops (garlic, potatoes, peas, onions, strawberries) are doing well enough, especially the garlic. And that is a very good thing.

Rows of potato plants well-mulched with straw to deter potato beetles, thus eliminating any need for pesticide. In a normal spring these plants would be starting to flower by now.

To all you new, or renewed gardeners, wherever you may be, it’s a learning experience; every season has its challenges and blessings. Go with the flow. Persevere.

4 thoughts on “The polar vortex challenge: looking on the bright side this gardening season”