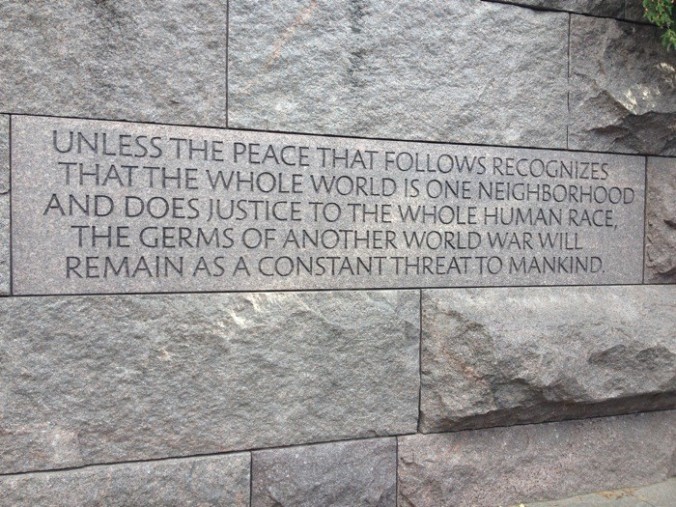 U.S. President Franklin Delano Roosevelt’s great words remembered at his memorial in Washington, D.C. As true and timely now as ever, perhaps even more so.

I’ve said it before, but it’s well worth repeating because of recent, bull-in-a-china-shop events in world affairs: self-awareness is a really important thing. END_OF_DOCUMENT_TOKEN_TO_BE_REPLACED

Dark hills at evening in the west,
Where sunset hovers like a sound
Of golden horns that sang to rest
Old bones of warriors under ground,
Far now from all the bannered ways
Where flash the legions of the sun,
You fade—as if the last of days
Were fading, and all wars were done.

That’s always been my favourite poem, ever since I first read it as a teenager and put it to memory.

It’s a poem with more than one level of meaning, including the most obvious one that usually brings Second World War General Douglas McArthur to mind – mine, anyway. I don’t know if he was recalling this poem when he uttered his famous, “Old soldiers never die, they just fade away” line in his farewell address to Congress after being relieved of command during the Korea War by President Harry Truman.

If so, his sentimental reference didn’t do justice to a great poem.

Though it certainly works on the literal level, it’s always moved me – and I hesitate to risk breaking the spell by trying to explain what really doesn’t require explanation and, God forbid, analysis – on a deeper level of pathos that speaks to being alive in the world, and then the end of it. Perhaps even the end of all things.

That may sound morbid. But I sometimes find myself, like tonight as sunset approached here at Cathedral Drive Farm, reciting it quietly over and over to myself, for spiritual consolation.

It’s comforting as well to know that their was a man – an American, by the way – who once lived in the world and was so wonderfully inspired to write such a great poem, so simple and accessible, yet so utterly, and mysteriously profound.

I am reminded of my favourite moment in music, a few minutes into the first movement of Sergei Prokoviev’s last piano sonata, the 9th. I first heard that too as a teenager listening to a recording of it played by Sviatoslav Richter. Prokoviev dedicated the work to Richter.

I am approaching an age now where the poem is becoming more meaningful for me, and the state of the world, which I confess I find depressing. But that’s not helpful, either for me or the world. So I’ve got to do something about that.

And one thing I do, perhaps too often, is bear witness here to the reason why I, and, I think, a lot of other people are also feeling discouraged about hopeful prospects for the future.  END_OF_DOCUMENT_TOKEN_TO_BE_REPLACED

This question is often asked by historians, and others who take an interest in such things:

How did one of the most civilized, cultured nations on earth fall victim to takeover by a ruthless, mass-murdering, dictatorial tyranny? How was the nation that gave the world the music of Bach, Beethoven, Brahms and Mozart led into a world war that killed many millions of people and left much of Europe in ruins, including Germany itself? END_OF_DOCUMENT_TOKEN_TO_BE_REPLACED

Cows being milked on a modern dairy factory-farm

Suddenly, unexpectedly, in the midst of worsening tensions with North Korea and the risk of a major, possibly nuclear war that entails, U.S., President Donald Trump took aim at Canada and fire what sounded an awful lot like a trade-war shot across our bows.

But of all the things Trump had to pick as an excuse to get bigly tough with Canada on trade, why did it have to be dairy? END_OF_DOCUMENT_TOKEN_TO_BE_REPLACED

I walk around making mental notes of all there is to do: a big pile of scrap wood to sort out and do something with; new eavestroughing to put on the new roof I built last fall for the extension on the house; a big barn-door to rebuild after it got blown off during a winter storm; and last but by no means least, garden-ground to cultivate when it’s dry enough, maybe by the end of this month. END_OF_DOCUMENT_TOKEN_TO_BE_REPLACED

Yesterday Canada celebrated the 100th Anniversary of the beginning of the Battle of Vimy Ridge during the First World War. That battle in which thousands of Canadian, British and German soldiers died has become part of Canada’s national mythology, a seminal event from which its emergence as full-fledged country in its own right is often dated.

Prime Minister Justin Trudeau and and a total of 25,000 other Canadians were there, along with many other dignitaries, including members of Great Britain’s Royal Family, Prince of Wales, Charles, and his two sons, Prince William and Prince Harry. French President Francois Hollande, were also in attendance.

But I daresay the dominant presence was the collective spirits of those who died there, watched over by one of the most strikingly-impressive, national war memorials ever conceived and built. The crowd has gone; the field of battle is relatively quiet again except perhaps for some visitors paying their respects. And of course the dead remain, in known and unknown graves.

END_OF_DOCUMENT_TOKEN_TO_BE_REPLACED

(Author’s note, May 23, 2017: since I first wrote and published this post, U.S. President Donald Trump has fired now-former FBI director James Comey. He has offered several reasons for doing so, including to relieve the pressure he felt he was under on account of the FBI investigation into Russia’s meddling into last fall’s U.S. election to allegedly help his campaign. It’s been widely reported Trump told high-ranking Russian officials in the Oval Office the day after the firing that he felt relieved the pressure was off. Turns out it wasn’t, as subsequent events clearly showed. His firing of Comey may yet prove to have been a huge blunder for him, setting in motion fateful consequences. We’ll see. Anything, and I mean anything, can still happen. Trump will not let the investigations, finish, including the one now in the hands of Special Prosecutor Robert Mueller.)

The definition of the word “terror” is easy enough: The Oxford dictionary defines it as “extreme fear.” Merriam-Webster defines it as “a state of intense fear.”

Some examples of how the word is used include, “a regime that rules by terror; bombings and other acts of terror; a campaign of terror against ethnic minority groups.”

But a suitable definition for the word “terrorism” is harder to come by. “The unlawful use of violence and intimidation, especially against civilians, in the pursuit of political aims,” says Oxford.  “The systematic use of terror especially as a means of coercion,” says Merriam-Webster. END_OF_DOCUMENT_TOKEN_TO_BE_REPLACED

Potatoes are a semi-hardy crop. You don’t have to wait until all risk of frost has passed, which is traditionally  the May 24th long, holiday weekend here in Hope Ness on the Bruce Peninsula, and most of the rest of southern Ontario. I’ve planted my certified seed spuds as early as mid-April and ran into a frost warning at least once later that month after those two rows young plants had just started breaking through the ground. So, I covered them with a fairly thick blanket of straw and hoped for the best. The frost didn’t actually happen. I pulled the straw aside and later used it as mulch around those plants. That’s how, by chance, I happened to discover mulching your potatos with straw is a fool-proof way of avoiding the major insect pest of potato plants, the Colorado potato beetle. Those two rows remained totally bug-free, while my many other rows that weren’t straw-mulched got the usual invasion, necessitating the usual early morning inspection and, well, crushing, one bug at a time. I later found from an agricultural professor at the University of Guelph who I happened to interview on another topic, that, with the straw mulch, “you interrupted the life-cycle of the potato beetle.” So, ever since then, I’ve mulched my potatoes with straw and never had Colorado potato beetle problem, thus saving myself a lot of time and money spent over the years on the organic pesticide known as bacillus Thuringiensis.

END_OF_DOCUMENT_TOKEN_TO_BE_REPLACED 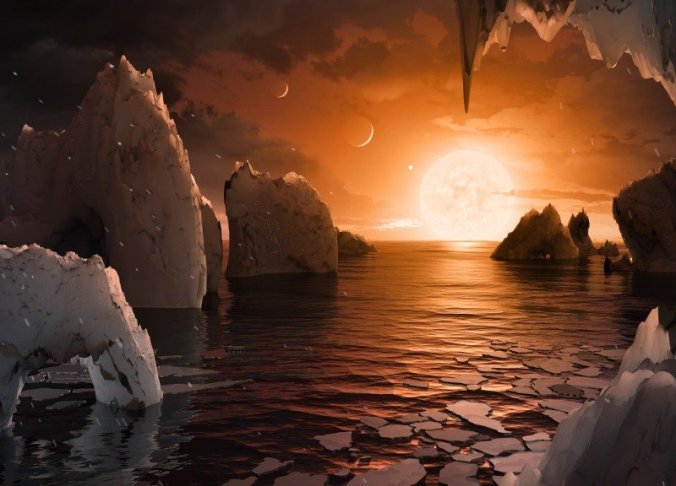 I bet I’m not the only one whose initial reaction to the big news this past week was the remarkably good timing of it, regarding the possibility of escape from this increasingly hate-filled world.

END_OF_DOCUMENT_TOKEN_TO_BE_REPLACED

The whole world’s buzzing over this photo. It’s gone viral, as they say in cyberspace.

I confess I haven’t laughed so hard in, well, at least a year.  END_OF_DOCUMENT_TOKEN_TO_BE_REPLACED