Just a few kilometres down our road here in the resurgent wilderness of Hope Ness on the Bruce Peninsula is perhaps one of the strangest, and certainly one of the most unexpected sights one would expect to find here of all places.

Just where the road passes through the deepest, darkest, most mysterious section of the Hope Ness-Hope Bay forest there’s been for many years a large group of jungle animals hanging on the tree trunks and branches on either side.

There aren’t as many as there used to be. Back in their heyday they included giraffes, lions and tigers, and gorillas. How they got there nobody knows. I suppose you could say it’s the Great Mystery of Hopeness.

Perhaps some local farmer with a quirky sense of humour, cottager, or tourist just passing through, happened to have a collection of surplus stuffed animals and thought this would be as good a place as anything to leave them hanging, so to speak.

Whenever it was, whoever it was went to a lot of trouble to climb the trees and even risk life and limb by somehow getting way out on the branches to carefully fasten some of the creatures to their positions, and then come back occasionally to make sure they were still in place over the years. Or maybe they had special equipment, a front-end loader or hoist like those used by the Hydro guys.

Alas, only three animals remain — something that looks like a bedraggled orangutan, and on another nearby tree, the emaciated remains of a creature I can’t identify. But the one survivor still in quite good shape is a remarkably life-like gorilla. It’s clinging rather jauntily to the trunk of a tree close to the roadway on the north side. It almost looks like it could suddenly come to life and continues on its way up or down the tree.

“Yes, here I am,” it seems to be saying. “And yes, you can look, but don’t you dare come too close, or you never know what I might do.” 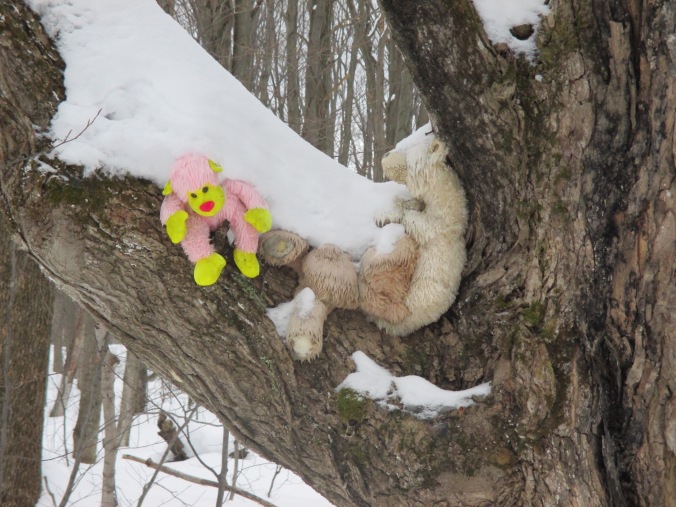 Speaking of bizarre senses of humour, mixed up more than a little with a mischievous turn of mind, I found myself thinking when I was down there one morning this week that it might be a neat idea to invite the person responsible, or, in his or her absence, like-minded people in general, to replenish the Hopeness menagerie of stuffed jungle creatures with a collection of G20 gorillas. A Rogue’s Gallery, if you like.

I mean no offence to gorillas. As I understand it, they are essentially peaceful creatures who just want to be left alone in their mountain-jungle lairs, though they may pound their chests and bluster through the underbrush furiously up to a point if they feel territorially violated or otherwise threatened.

But in human-primate parlance “gorilla” is also a pejorative, used to describe someone who is a big, stupid bully, a thug, or “goon.” That’s the gorilla I’m referring to here, the stuffed effigies of those who helped turn the G20 Summit environs (most of downtown Toronto) into the scene of one of the most shameful episodes in Canadian history.

I couldn’t agree more with Steve Paikin who, in an opinion piece published by the Ottawa Citizen, called it “a black day for democracy,” considering the extent to which civil rights were brazenly and frequently violated by police.

“Too many officers seem to have overreacted numerous times in dealing with members of the public and journalists. They used too much force in detaining many people who either were protesting peacefully, or were just passing by at the wrong time,” Paikin wrote.

So, who is Steve Paikin? Just one of Canada’s most respected broadcast journalists, the host of TVO’s Agenda current affairs show.

I suspect the police officers who assaulted another journalist in full view of Paikin don’t watch TVO, otherwise they might have recognized him and thought twice about what they were doing. The other journalist was Jesse Rosenfeld, a correspondent for the Guardian newspaper in the UK.

“Two officers held him while a third punched him hard in the stomach,” Paikin reported in shocking detail. “As Rosenfeld collapsed forward, that same third officer drove his elbow into Rosenfeld’s back.

“It seemed an unnecessary overreaction — three officers to subdue an asthmatic journalist who looked all of 5’6″ tall, maybe 145 pounds, and, I later learned, is missing one kidney.”

Rosenfeld was one of four journalists who have filed complaints with Ontario’s Independent Police Review Director’s office. Another, Amy Miller, a freelance reporter, alleges she was threatened with rape before and after she was arrested and taken to the now-notorious, temporary detention centre where many of the 900 people taken into custody by police were held during the summit.

The Canadian Civil Liberties Association, which closely monitored the protests and police response, has issued a scathing interim report with numerous eyewitness accounts of police violations of civil liberties, including mass arrests of protesters and other members of the public who just happened to be in the vicinity.

“This practice is a violation of civil liberties and is clearly contrary to the Canadian Charter’s guarantee of freedom from arbitrary detention or arrest, and violates international human rights norms,” says the CCLA report.

Yes, it was shocking to see police cruisers set afire on downtown Toronto streets. And that small, hard-core group of “Black Bloc” fanatics, or whoever is responsible, deserve to be arrested, tried and punished for their crimes. And I would certainly include them among the effigies of the gorillas, goons and thugs that might decorate the Hopeness forest.

I suppose the sight of police cruisers torched might have inflamed some police officers to violence, but surely it goes without saying that’s no excuse, and we expect far better from the authorities in and out of uniform who are sworn to protect, not violate, our democratic rights. So, they belong in the new Hopeness rogue’s gallery too.

And those who set the scene for the Toronto Tragedy also deserve to be there, including everyone in government who called the shots, who spent more than $1 billion on summit security, and turned Toronto into an armed camp, a virtual police state.

Shame on you all.

Originally published in The Sun Times in 2010.