The day before I had started to walk that section of the Bruce Trail that enters, or emerges, from the woods right at the end of my driveway. But as some of you may know my attention was caught a short distance along by a rock formation partially covered by moss that was luminous with life on an otherwise grey day.

I went back late this afternoon to finish that walk to what surely must be one of the best lookouts on the Niagara Escarpment. The sun was low in the sky, but bright, and lighting up the still largely snow-covered forest floor. So, in places it was still a bit of a slog. But at this time of year without the leaf canopy overhead you get a chance to see the forest in a different, perhaps more revealing light in some ways. 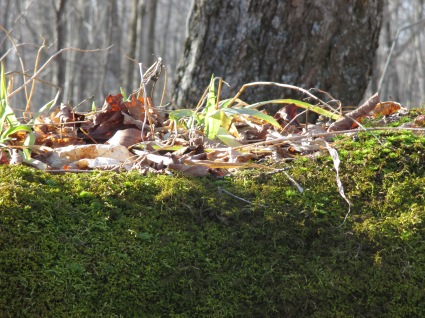 A little, wild garden coming back to life on a rock

I can’t walk here without thinking of Wilma (Tucker) Butchart who loved these woods dearly. She was born and raised in Hope Ness and during her long adult life lived on the Cathedral Drive farm I now call home. She was one of the first people I met when I bought another old farm house in Hope Ness and moved up from Toronto in the early summer of 1979.

Wilma was a remarkable woman, a talented artist, musician, poet, local historian, gardener, mother of three sons, and hard-working farmer. I will certainly have more to say about her as time goes by in this blog. I mention her now because I know how she felt about this forest, and especially the view from the cliffs overlooking Hope Bay and the broad, blue expanse of Georgian Bay in the distance. I think it was her special place, her refuge, the place she went to restore her energy, and heal her spirits. 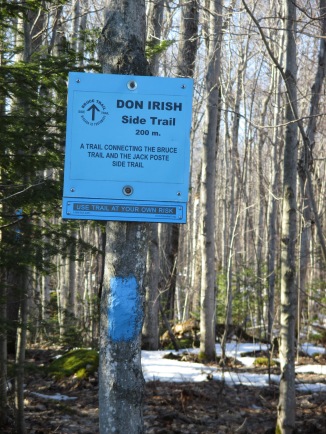 I remember Wilma telling me years ago why she named the forest The Cathedral Woods. She said walking under the lofty canopy created by the mature maple, beech, ash, and white birch here and there, gave her the impression of being in a cathedral. I don’t know how official that name became, if it ever did. But Cathedral Drive is the official name of the short, municipal road that leads to the farm, sometimes still called “the old Butchart place,” even by me. That’s usually when I’m talking to local folks who were born and raised in the area, like Wilma. I’m getting into the habit of calling it Cathedral Drive Farm. It just started to feel right, so I’m going with that name. I think Wilma would approve.

At some point, The Hope Bay Nature Reserve officially became part of the Ontario Parks system, and when Parks’ officials felt the need to put up a sign marking the boundary of the forest, the name Cathedral Woods got changed to Hope Bay Forest. I suppose it’s not hard to imagine the politically-correct reason why. But it was news to me when the sign went up a couple of years ago, and after all I am a neighbour.

It’s about a 15-minute walk along the trail from the farm to the lookout, with a fairly short hike on a branch trail. It’s well worth making that turn, as you can see. I’ll let the photos speak for themselves about that, while adding there’s nothing like the real experience. Make sure you watch your step though when you get to the lookout; those shrubs on the cliff-edge can be deceiving, and it’s a long way down. A misstep could be dangerous.

By the way, the story of how the Niagara Escarpment was formed is interesting. It’s a long story, beginning many millions of years ago, when, believe it or not, what’s now called North America was on the equator. Several ice ages were involved, with the last one, the early and late Wisconsin Glaciation, beginning 115,000 years ago, and lasting more than 100,000 years. At its peak the glacier covered all of this part of Canada under two kilometres of ice.

Those moss-covered rocks you see were likely carried here by the glaciers from very far away thousands of years ago and left behind as the ice melted.

For a good explanation of how the Niagara Escarpment was formed I suggest going to www.giantsrib.ca