In the morning I take some time to stand amid the buckwheat, fully in bloom now, and listen to the murmur of countless bees and other insect pollinators. The bumblebees seem to be most prevalent, certainly most visible. Where they go when they’re not hear gathering nectar from dense proliferation of white, buckwheat flowers, I don’t know. I let them be, no pun intended, but I think a lot about the great danger posed to them and their buzzing friends by the widespread use of the most recent type of human-made pesticides, neonicotinoids, or neonics for short.

And I feel good about what I’m doing here at Cathedral Drive Farm in Hope Ness: making a point of using buckwheat as a soil-replenishing cover crop, but also helping to create a little pollinator refuge. As I stand listening and watching in the buckwheat I feel like I’m among friends.

It’s more than the buckwheat and the bees. I have made a point of not cultivating a nearby area of dense milkweed growth. The result is a amazing increase in Monarch butterflies here at the farm, especially this year. I’ve never seen so many. 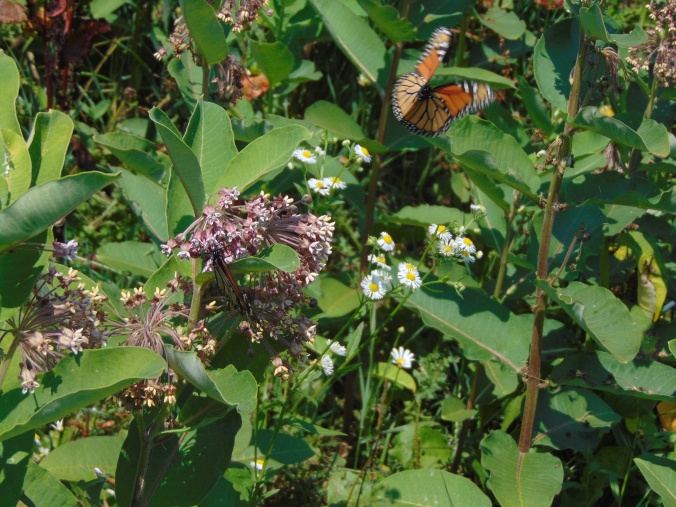 A Monarch butterfly feeding in the Milkweed

Globally, the world’s honey bee population is in steep decline, and no doubt wild bees and other pollinators. There is strong scientific evidence that neonics, used in conjunction with large-scale, mono-cropping especially are to blame.

But regulatory steps to lessen or outright ban the use of neonics has been slow in coming. This past week, the Trump administration in the U.S. took a big step backward, and signaled that for the time being the bees can’t expect to get any life-saving help from President Donald Trump. That’s not just their problem. A high proportion of the food human beings eat depends on pollination.

Here’s what the center for Biological Diversity had to say about it in a news release:

“The Trump administration’s U.S. Fish and Wildlife Service has announced it plans to reverse a 2014 national wildlife refuge system ban on the use of bee-killing neonicotinoid pesticides and genetically modified crops that trigger greater pesticide use.

“The announcement late this week comes a day after the California’s Department of Pesticide Regulation released a major new  finding that four widely used “neonic” pesticides can cause much broader harm than previously thought to pollinators commonly found on many vegetables, fruits and grains, including crops like corn and sorghum that are frequently grown in wildlife refuges.

“‘Agricultural pesticides, especially bee-killing neonics, have no place on our national wildlife refuges,” said Hannah Connor, a senior attorney at the Center for Biological Diversity, who this year authored a report documenting the annual use of nearly half a million pounds highly toxic pesticides on America’s wildlife refuges. “This huge backward step will harm bees and other pollinators already in steep decline simply to appease pesticide-makers and promote mono-culture farming techniques that trigger increased pesticide use. It’s senseless and shameful.’

“In 2014 the National Wildlife Refuge system announced it would ban use of neonics and genetically modified crops that cause increased pesticide use on national wildlife refuges. The ban was an effort to ensure that management of the refuges that were created to provide natural habitats for wildlife “restores or mimics natural ecosystem processes…”

“Spurred by the growing body of scientific research showing the broad harm neonicotinoids pose to bees and other pollinators, earlier this year the European Union banned neonics for outdoor uses in agriculture. Europe’s decision came after Canada’s pesticide regulatory agency recommended banning imidacloprid, the most widely used neonicotinoid, based on demonstrated harms to aquatic ecosystems.

“One of the most important findings of the new California neonic analysis is the discovery of the high risk to bees posed by use of two neonicotinoids, thiamethoxam and clothianidin, on cereal grains like corn, wheat, rice and sorghum.

‘”Wildlife refuges are places where we should be protecting wildlife, not promoting use of highly toxic poisons on row crops,” said Connor. “All the strongest scientific evidence leaves no doubt we should move aggressively toward banning all outdoor use of these harmful neonics, yet the Trump administration is aggressively expanding their use.’

“The Trump administration’s decision to reverse course and allow use of genetically modified seeds on wildlife refuges will also spur greater use of highly toxic pesticides on these lands. Most genetically altered crops are designed for the specific purpose of making them resistant to herbicides like glyphosate and dicamba, which in turn allows farmers to increase their use of these pesticides in the summer months when many animals are out foraging.”

Obviously the Trump administration is ignoring the growing body of evidence against the use of neonics; or just doesn’t care, not only about bees and other pollinators, but about the future of the U.S. food supply that depends on pollinators.

Well, up here in Hope Ness, Ontario, Canada I do what I can to help the bees and butterflies. Every little bit helps.

May I suggest, as well, that south of the border U.S. President Donald Trump, might want to find a field of blooming buckwheat somewhere and stand quietly there, listening to what the bees have to say. Or at least for for a walk in the White House garden, find some bees going about their business, and just stand there for a while in quiet contemplation.

Now, that would be a step in the right direction.