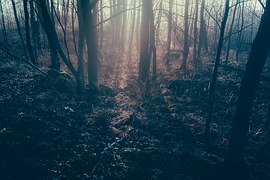 I was awakened a couple of times through the night by a vivid, troubling dream – a nightmare full of anxieties about not being able to do anything because there was too much to do, not knowing even where to start, and then having my most precious equipment stolen right before my dream eyes.

I was supposed to clear some land of a few small trees. But as I surveyed the site, I discovered there were far more; and many of them were very old and had grown up right beside the ruins of ancient stone buildings. They had essentially become part of those structures. So, how could I cut down those trees without ruining what was left of the buildings and thousands of years of heritage? I put my chainsaw down, as I saw no way of proceeding with the job.

But suddenly there were other people around, looking to get on with their work. Apparently it was about moving a huge amount of chaotic stuff from one warehouse-sort of place to another, new facility, but in an orderly way. I felt a strong sense of needing to organize and take the lead in that work. That too was supposed to have been my job. I wandered around, trying to figure out how and where to get started.  But the work began without me. And then I remembered I had left my chainsaw on the ground, just in time to see it being picked up and stolen by someone who then just walked away, out of sight. Everything was falling apart.

I wandered around the old warehouse for a long time, but couldn’t find any way to bring the situation under control. If I could just pick up one thing and move it from A to B, or just pack one box, maybe that would be something.

I thought about calling 911 to report the theft of my chainsaw. But I went looking for it instead. I did indeed soon find it, completely disassembled. The various parts were scattered around. I started picking them up, but some were missing, and besides, not being that mechanically inclined, I soon realized I wouldn’t be able to rebuild the machine.

It made no sense at that point, but I called 911 to report the theft and damage to my chainsaw. I stressed to the woman who took the call that it was my “essential” tool, that it had cost more than $500, and that I couldn’t work without it. But she didn’t think there was much if anything the police could do; after all, hadn’t I found it.

“But it was stolen,” I said. “I can’t afford to buy another one, and now I can’t do anything.”

I woke up at that point for the second time that night. The first time was also in the midst of an earlier dream I can’t remember, except I know I had to wake up to reassure myself it was “just a dream,” and not actually real.

But they are real, aren’t they, more real than what we call “reality.”

Why do we dream, if not so our inner self, our real self, can tell us about something very important beyond the ability of conscious selves to express and understand without the help, the intervention, of a dream/nightmare? Are our conscious minds so afraid to face the truth? Are they so shallow we need dreams to plumb the depths of self-prophecy, to warn us of personal catastrophe ahead.

I know now, for sure, I had such a dream once –very vivid, and not in the least need of interpretation, because it was so real and obvious. It was a clear warning, and I ignored it, or just forgot it until one day years later, I remembered the dream, and shook my head.

But I think sometimes even dreams put themselves in coded images because the truths they are trying to tell us are so hard for even our sub-conscious minds to face directly. And then if we don’t write them down right away, we risk losing them.

However, that dream two nights ago was one I will likely never forget. In that sense it was like a recurrent nightmare I had as a child. I used to dread bedtime, and going to sleep. But at some point it stopped.

I cherished sleep for years, “Sleep, that knits up the ravell’d sleeve of care.”

Sleep was my refuge. I had no trouble getting there, and 99.9 percent of the time I slept peacefully and soundly. Especially when I occasionally slept outside, I awoke with an amazing feeling of rejuvenation. I highly recommend it.

But during a bout of job-related depression about 20 years ago I was prescribed Prozac, one of the first anti-depressant, selective serotonin, re-uptake inhibitor (SSRI) medications. I took it for some months, and it soon ruined my sleep pattern. It never recovered.

After I woke up about 5:30 am from that vivid dream/nightmare the other night I was afraid to go back to sleep for fear of going right back into it. Last night, as bedtime approached, I was even reluctant to go to sleep. I read my current bedside book, Eric Metaxas’ excellent biography of Dietrich Bonhoeffer, longer than usual. But I am pleased to report I slept soundly, and peacefully, until daybreak. It was the best night’s sleep I’ve had in a long time.

So I’m thinking something therapeutic happened the night before and hopefully bedtime will again be a pleasurable, restful experience from here on in.

Hear me, my children, don’t ignore your dreams.

One thought on “Don’t ignore your dreams”