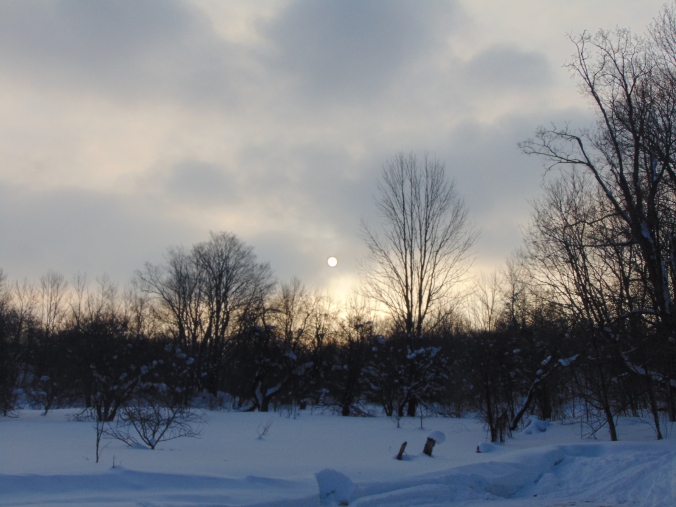 The hopeful, early-morning sun breaking through the clouds over the Hope Bay Forest

There was just a hint of spring in the air, or so I imagined hopefully, as my canine friends and I took our usual early-morning walk down Cathedral Drive here in Hope Ness, beside the Hope Bay Forest, just north of Hope Bay.

But there were clouds overhead, actually and figuratively, as we headed north on the road. My head was full of troubling, pessimistic thoughts in the wake of the Feb. 9, not-guilty verdict in the trial of Saskatchewan farmer Gerald Stanley.

He was charged with murdering Colten Boushie, a 22-year-old Indigenous man who was one of a group in an SUV driven onto Stanley’s farm Aug. 9, 2016. The non-Indigenous cattle farmer testified during his trial that a pistol he was carrying in one hand fired accidentally when he reached into the vehicle to turn off the ignition with his other hand. Boushie, who was still inside the SUV, was shot in the head and died.

That alone would be reason enough to raise questions and concerns about the outcome of the trial. But other optics were terrible: Numerous news reports that quickly spread across Canada, and were also carried internationally, never failed to point out that an “all-white jury” heard the case in a trial presided over by a “white” judge. The world was told anyone in the pool of potential jury members who looked Indigenous was peremptorily refused by the defence under Canada’s rules for selecting juries.

Similar outcomes under those circumstances have, and would still lead to violent protests in other national jurisdictions with a history of racial oppression and injustice. Canada was just in the opening stages of a “Truth and Reconciliation” process aimed at making amends for such a history and building a new and better relationship with the Indigenous people who were here thousands of years before European and other newcomers began to arrive several hundred years ago.

There were indeed protests in the immediate aftermath of the verdict; but this being Canada perhaps, they were remarkably peaceful and non-violent. Members of Boushie’s family travelled several thousand kilometres to Canada’s capital, Ottawa, to meet and talk to key members of the Canada’s Liberal government, and finally, Prime Minister Justin Trudeau. They left hopeful and encouraged by promises that changes would be made to the justice system, including the way jurors are chosen. The day after the family met with him, Trudeau announced the government will develop a new “framework” to guarantee that Indigenous, or Aboriginal rights, broadly recognized in the Canadian Constitution, are suitably recognized in detail going forward.

The new framework is expected to be developed this year, with the help of broad consultation with Indigenous groups and other sectors of Canadian society, and implemented in 2019 before the next Canadian election.

Much has already been said since then, and much more will no doubt continue to be said in what amounts to Canada’s “moment of truth” in relations with First Nation, or Indigenous, people who live within its borders.

How it goes from this point on remains to be seen. Obviously, Canadian governments — federal and provincial – will have an important, leadership role to play, as will First Nation leaders at all levels.

But ultimately, it’s the attitudes of people who make up both the Indigenous and non-Indigenous communities that will decide how the discussion progresses, or not.

Are we are prepared to open our hearts and minds to the idea that we can be part of the process of building an inclusive country based on trust, that everyone can live in peace, mutual respect, and justice together? Do we think that’s even possible and worth trying?

Are non-Indigenous people willing to listen with an open mind to the idea that First Nations are entitled to a special status in a reconciled confederation: not as provinces, territories and certainly not as virtual municipalities, but, literally, as First Nations that entered into treaties or otherwise had a nation-to-nation trust relationship with the British Crown, and its successor, Canada?

Are Indigenous people – some, not all, of them — prepared to make a gesture of reconciliatory respect toward non-Indigenous people and Canada ending the use of derogatory, disrespectful language such as “settler community” and “settler society?”

I hope so again.

It is not helpful. On the one hand, speaking personally, I understand the history of betrayal, the pain and anger that underlies it; but on the other, this country called Canada is the only home I have ever known. It’s an important part of who I am, and no doubt there are many others like me who feel the same way.

Will we all, if necessary, be willing to accept some degree of compromise for the sake of a reconciled Canada?

Or do we prefer to remain trapped in a worsening, vicious cycle of prejudicial attitudes toward each other, and all the unspeakable risks that entails?

As my animal friends and I headed for our daily destination, the words that stood out in my mind above all that has been said in the past week were those of Senator Murray Sinclair, the former Chief Commissioner of the Indian Residential Schools Truth and Reconciliation Commission. The final, multi-volumed report with its 94 recommendations released a little more than two years ago called on everyone in Canada to join in a spirit of reconciliation to help build a more respectful relationship between Indigenous and non-Indigenous people.

He warned then it could be difficult, possibly more difficult than getting at the truth of the traumatic, Indigenous residential-school experience. “We have described for you a mountain. We have shown you the way to the top. We call upon you to do the climbing,” he said at the time.

Born in Manitoba on a First Nation reserve north of Winnipeg, Sen. Sinclair was appointed Associate Chief Judge of the Provincial Court of Manitoba in 1988, making him the first Indigenous judge in the province, and only the second in Canada up to that time.

He opened his heart to all of Canada in the immediate aftermath of the verdict in the Gerald Stanley trial with a poem he wrote and posted on Facebook. It began with these words, “Today I grieve for my country.”

Those words were in my mind all this past week, and on my morning walk to what I call my “touchstone,” a large, moss-covered boulder not far now from the road. It was left there thousands of years ago by the retreating ice-age glaciers that covered this area to a depth of several kilometres. The rock most likely was picked up and carried down by the glaciers from somewhere on what we now know as the Canadian Shield, a vast area of the oldest stone on Earth.

I have gotten into the habit in the past six months or so of saying a prayer, in my way, as I touch the rock with both hands. Call me …well, whatever; but I think maybe it helps complete the circuit, if you know what I mean. This morning, on the day I write this, I prayed extra hard for Colten Boushie and for Canada.

I thought about how as the morning walk began I had imagined there was a touch of spring in the air. But I realized it was foolish at my now undeniably elderly age to wish away any amount of time I might have left. Every moment of life is precious. I thought again of Colten Boushie, by all accounts by family and friends, a kind and helpful young man, who had his whole life ahead of him.

“My first reaction was that could have been me – when I think about my life and the situations I was in at the same age Colten Boushie was when he died,” said Manitoba NDP leader Wab Kinew in one of the news reports I read this week. Colten’s family “will never be able to see the things” Colten could have done, he said.

I have expressed my feelings in this space over the years quite a few times, about Canada being an example to an increasingly hateful world of how people of many different nationalities and cultures can live together in peace. It’s not perfect; it remains a “work in progress; but it works,” I have said.

But this week, I confess I found myself full of doubts about whether or not we’re – all of us – up to the challenge of Truth and Reconciliation.

The morning walk helped. As I left my touchstone and headed home I looked south and noticed the morning sun starting to emerge from behind skirting clouds, slowly but surely, leading to a sunny day.

A version of this post was originally published in The Sun Times in February, 2018