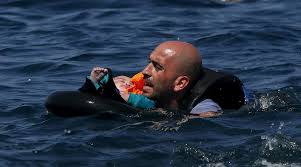 To those fleeing persecution, terror & war, Canadians will welcome you, regardless of your faith. Diversity is our strength.

There it is. That’s what the fuss is all about, the entire reason why, according to Conservative politicians in Toronto and Ottawa, Canada is in the midst of a “migrant crisis,” or more succinctly, in a “mess.”

Words are important, especially hyperactive words like that, with hateful, anti-migrant, populist/political movements coming to power in the U.S. and Europe while millions of displaced people are risking their lives to find a safe haven, or barely surviving in squalid refugee camps.

In Germany, Chancellor Angela Merkel is coming under increasing political pressure because of her strong support for taking in migrants. That’s despite the fact the number of asylum seekers entering Germany has steadily fallen since 2015, when one million were taken in under a policy Merkel dubbed “Willkommenskultur,” or culture of welcoming.

This year so far, about 15,000 migrants per month have applied for asylum in Germany, noted a recent article in the Washington Post. Elsewhere in Europe the number is down 25 percent this year from the same period in 2017. So, the “migrant crisis” is waning, while the “political crisis,” fueled by the growth of far-right, neo-nationalism and what invariably comes with it: a creeping decline in respect for basic democratic principles, like fair treatment for all people under the rule of law, regardless of race or religion

Meanwhile, on the sidelines, across the Atlantic, anti-migrant U.S. President Donald Trump cheers the election of more like-minded new governments, most recently in Italy.

The number of asylum seekers taken in by Canada since January, 2017 pales in comparison to the German numbers, even now, let alone all of Europe.

It appears likely at least 150,000 people will apply for asylum this year in Germany, a country with about three times the population of Canada, though of course a lot less room. In 2017, the number of people seeking asylum in Canada, after being intercepted by the RCMP entering the country at “irregular” border crossings, was 18,615. So far in 2018, to the end of June, that number is 10,744, according to the Immigration, Refugees and Citizenship Canada website.

A backgrounder on the website notes a crucial point, that 62 million people in the world “are currently displaced by wars, persecution and natural disasters.” Now, that’s a crisis. A refugee camp is no place to raise your family.

A Rohingya family fleeing genocide in Myanmar in 2015

The website also says the government is “committed to protecting the safety of Canadians and keeping our border secure. At the same time, asylum seeks must be treated with compassion and afforded due process under the law.”

The new Progressive-Conservative government in Ontario, and the official opposition Conservatives in Parliament would not agree with any part of that statement, but especially in this context, the need for compassion and due process. And that is tragically out-of-touch with the realities of the world future generations of our children and grandchildren are facing if we fail to respond compassionately to this history-changing crisis.

The new government of Premier Doug Ford was the first to raise the so-called “migrant crisis” issue, saying that because in their view Prime Minister Justin Trudeau caused the problem Ontario has no obligation to help pay for the housing and other expenses of asylum seekers. In fact, the Ford government has demanded $200 million from the federal government to cover the so far.

That’s either a lie, woefully ignorant of the truth, or, worst of all, a veiled validation of Trump’s cruel, zero-tolerance, anti-migrant policies – separating children from their parents, for example – in the U.S.

For the record, again, Trudeau’s January, 2017 tweet welcoming migrants to Canada came in the wake of Trump’s first, proposed travel ban on people from a number of majority Muslim countries, mainly in the Middle East. The influx of asylum seekers entering Canada at irregular border crossings didn’t really start in a big way until after the Trump administration signaled in May, 2017 that it was going to deport the 59,000 Haitians who were given refuge in the U.S. under Temporary Protection status. That happened after Haiti’s devastating 2010 earthquake. In fact, that status was officially ended last November.

In January, 2017 the total number of asylum seekers entering Canada at irregular crossings – rather than regular ports-of-entry policed by Canadian Border Service Agency officers – was 345. It was 884 in June that year. Suddenly, in July it jumped to 3,134, then peaked at 5,712 in August before dropping back down to 1,881 in September. It remained at that level for the rest of the year. So far this year the trend continued, except for April, when it rose to 2,560. But it fell to 1,263 in June.

The threat of Haitian deportation appears to have sent a shock-wave through a wider migrant community in the U.S. in addition to Haitians. A high proportion of the migrants who have sought asylum in Canada after entering at irregular locations, mostly in Quebec, have been from west African countries, especially Nigeria.

Indeed, such were the apparent origins of the migrants crossing the border into Canada that the Conservative Party designed an attack ad critical of the Liberal government that featured a black man carrying a suitcase as he walked toward the Canadian border. The ad was quickly taken down after being up only briefly.

If Conservative politicians and strategist think the way forward to more public support and power in Canada is to push the anti-migrant, populist hot button they are playing a dangerous game indeed with the future of Canada, and the world.

A version of this post was originally published in The Sun Times in August, 2018