I was going to start off here by doing the gracious thing after the federal election and congratulate newly re-elected Bruce-Grey-Owen Sound Conservative MP Larry Miller on his victory. To win re-election by such a wide margin must be, one would think, a “humbling” experience in the way politicians use that word in the aftermath of a successful election campaign. (Chances are they’re anything but humbled.)

But I have just read the Honourable Member’s letter to the editor in Wednesday’s issue of this newspaper and I no longer feel like offering him congratulations; instead, I will criticize him for what strikes me as ill-timed arrogance and a shocking lack of appreciation of basic democratic principles for one now entering his fourth term as an elected representative of the people.

Freedom of the Press, and all that entails has long been a right in this free country. It is currently enshrined and guaranteed in the Canadian Constitution.

It has been the long-standing practice of newspapers, and now other news media, to endorse candidates for public office, and generally express political opinion. That has been their stock and trade, along with reporting the news. It harkens back to the days, beginning in the 18th Century, when newspapers were in the vanguard of the democratic movement to give ordinary people control over the affairs of state.  Often at the risk of violent and oppressive reaction, newspapers began to publicly question and criticize the injustices of the established, privileged, and dictatorial social order.  Canadians and the people of every other democracy in the world owe much to freedom of the press for the liberties they enjoy today.  And the existence of a free press  to question and criticize, to generally hold the feet of politicians and other public officials to the fire of public inquiry remains one of the most important means of protecting our democratic society against the rise and exercising of arbitrary, unaccountable power. 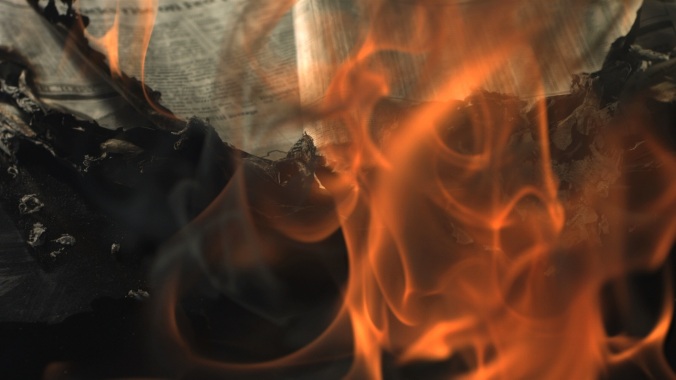 In his letter to the editor Miller said, “My opinion has always been that the media should report the news, not be the news.” The comment was made in the context of his “initially” being pleased that The Owen Sound Sun Times did not endorse any of the local candidates in the election. He said, “the media should make the public aware of all the facts about the candidates and the political party they represent and then step back and let the public make their decision.”

Election campaigns are full of the opinions of various people and groups expressing their views in the media, on the street, over the fence or at the front door, at political rallies (except Conservative ones in this past election), or all-candidates’ meetings. The various parties spend millions of dollars on advertising with opinions about why people should vote for them. Why should the press, the news media, which cut its teeth on questioning politicians and expressing political opinion, be muzzled in that regard, especially during an election campaign?

It should not be, of course. And Larry Miller should know better.

In his letter, published in this newspaper two days after voting day, Miller also announced that in future, if he runs again, he will not attend all-candidates’ meetings, with the exception of those held in schools or seniors, homes. With those two exceptions, “these debates have simply become a contest to see which candidate can get the most supporters out,” he said.

He said at the April 27 all-candidates’ meeting in Owen Sound only a small proportion of the 300 people there indicated they hadn’t decided who to vote for. That’s no surprise, considering it was just five days before the vote.

Miller chose not to attend an earlier all-candidates’ meeting in Owen Sound in favour of a meet-and-greet event in Hanover. Every public event is worth attending during an election campaign, but especially one that subjects candidates to questions that call for public responses.  It gives voters a chance to observe the quality of the candidates, especially their ability to think and talk more or less spontaneously. It also happens to be the one local venue almost certain to be covered by the local news media. It’s all about being accountable. Yes, there is an element of risk for candidates who can’t rise to the occasion. But isn’t that the point?

And by the way, the possibility of being heckled, at an all-candidates’ meeting or in the House of Commons, comes with the territory. It shouldn’t get dirty, and there are ways of controlling behaviour; but heckling is after all an expression of dissent that has long been part of the parliamentary tradition.

I wonder to what extent Larry Miller’s attitude toward the news media and facing up to tough questions in a public forum are shared by the rest of the newly-elected, majority Conservative caucus, and especially in the all-powerful Prime Minister’s office.

With a minority government Prime Minister Stephen Harper demonstrated an excessively controlling attitude. He had no tolerance for dissent. His government was anything but “transparent and accountable” as he promised it would be.

That same attitude dominated his national election campaign. It was most dramatically demonstrated when a student was marched out of a Conservative rally for the sin of having had her photo taken with now-former Liberal leader Michael Ignatieff.

That should have frightened far more people than it apparently did, considering the election results. But then, all it took to get a majority government was a support of just 40 percent of Canadian voters.

Some observers think Harper might be able to put his insecurities aside and act with more moderation now that he’s got his cherished majority. I hope so too, but I doubt it.

There’s all the more reason now for freedom of the press to come to the fore, perhaps as never before. If there was ever a Canadian government that deserves to be watched closely by inquiring eyes for all sorts of reasons, this is the one.

Originally published in The Sun Times in 2011.