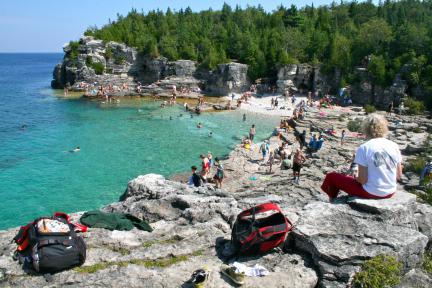 In recent years the Bruce Peninsula National Park has become an important international tourist destination, with much of the attention focused on the Grotto, above.

(This update corrects an error in the naming of the two First Nations that comprise the Saugeen Ojibway Nation. It also adds some additional information regarding the status of the case.)

The original version of this blog-post was published in Finding Hope Ness on December 19, 2015. The title then was, Saugeen Ojibway land claim lawsuit may soon be settled, one way or another. At the time there were reasons to think 2018 could be the crucial year for reaching a resolution of the now-almost 25-year-long court action.

But 2018 has come and gone, with no indication to the general public that a negotiated settlement is in the works.

The Saugeen Ojibway Nation (SON) took the unusual step in 1994 of filing a lawsuit in the Ontario Superior Court of Justice to settle long-standing land claims after years frustration with the government-sanctioned process. END_OF_DOCUMENT_TOKEN_TO_BE_REPLACED